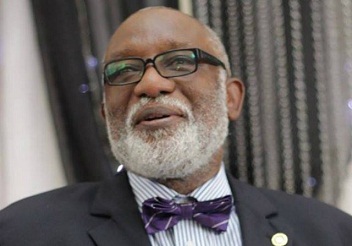 By Adekola Afolabi
|
The people of Uso community in Owo Local Government area of Ondo State led by their monarch, the Oloba of Uso, Oba Ademola Adebiyi Olanipekun, have applauded the state governor, Arakunrin Oluwarotimi Akeredolu for giving hope to many hopeless communities in the state.

Oloba of Uso spoke yesterday while leading Oloba-in-Council and other people to worship with the governor at Government House Chapel of Grace, Akure.

The monarch specifically lauded the  transformation agenda and aggressive infrastructural development of the Governor across the state including his domain, saying that the entire Uso community would support the governor for another term to enable him do more for the people and the development of the state.

Oba Olanipekun, who is the nineth monarch to have led his community to worship in the chapel since the programme began some weeks ago added that his people were committed to the realisation of second term of the Governor in the interest of the state.

He said his people were happy to worship at the Chapel, just as he expressed optimism that the development would herald in new things in the community and the lives of the people.

The monarch equally applauded the governor’s aggressive infrastructural development in the area of construction, rehabilitation and expansion of roads, saying Akeredolu has brought hope and transformation to many hitherto hopeless communities across the state since assumption of office two years ago.

Oloba further appreciated the governor for giving the mega school in Uso to Rufus Giwa Polytechnic, Owo, stressing that the development has improved socio-economic development and incomes of the people of Uso and the adjoining communities.

The monarch also appealed to governor for quick completion of the ongoing Pauso bridge, rehabilitation of the community’s roads, presentation of transformer to the community, appointment of Uso indigenes into government offices among others.

Speaking on behalf of the governor, the Special Adviser on Public and Inter-Governmental Relations, Mrs Bunmi Ademosu, appreciated the monarch and people of Uso for their unalloyed support for his government, assuring them that government would not forget them in its  infrastructural drive.

She called for more support to enable government do more in its determination to extend dividends of good governance to every nook and cranny of the state.

Ademosu said government would soon embark of renovation of schools in the community and more infrastructural development for the benefit of the people.

Earlier in his sermon, the Guest Preacher, Rev’d Tunde Akinkuneyin, admonished Nigerians to always sow seeds of mercy to the needy in the society and show interest in the comfort of others.

While saying that there is nothing God cannot do and that prayers change things, the clergyman advised all to be prayerful and avoid unacceptable kind of prayers.

Also, the Chief Imam of Uso community, Alhaji Ibrahim Oyinlade, who was part of the service, commended the governor for his giant strides across the state.