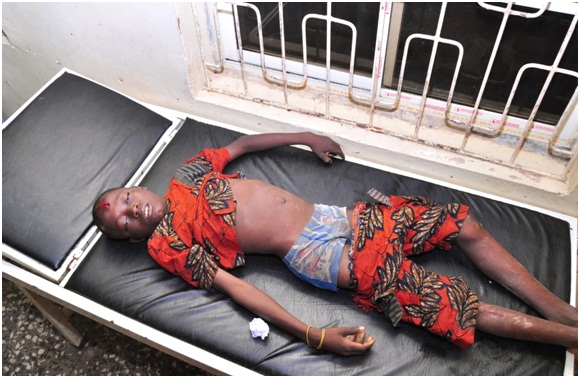 A van loaded with planks has crushed a ten-year-old boy, identified as Olaniyi Ayomide, to death in Ondo West Local Government area of Ondo State.
It was learnt that the incident occurred on Friday at about 8.30pm in the Ayeyemi area.
The deceased, who lived in the area, with his parents was reportedly walking by the roadside with his father on their way home from his father’s shop when he met his untimely death.
An eyewitness, who identified himself as Dele, said the victim was going by the roadside and was unaware that the driver of the van on high speed was approaching.
According to Dele, the driver was on high speed as he tried to dodge law enforcement agents who had warned him not to convey the planks in the night again.
“The man tried to evade arrest by Amotekun men and in the process, he knocked down the boy and crushed him to death, he said.
The eyewitness, a commercial tricyclist, described the sudden death of the boy as horrific.
James said, “I just dropped a passenger and made a u-turn to the side of the road where the boy was walking with his father.
“I sighted the van, but before I could call their attention to it, it was too late as the van was already close to them.
“The driver of the van also saw them late because he tried to apply the emergency brake. Unfortunately, the driver’s effort was not enough.”
It was learnt that FRSC patrol team later took the remains of the deceased to the mortuary while the van driver was arrested by Amotekun Corps.