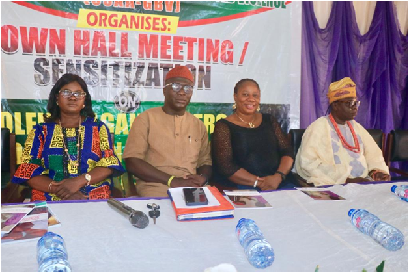 The Ondo State Government has   sensitized stakeholders on the Violence Against Persons Prohibition (VAPP) Law across the 18 Local Government areas of the State.

The  State Agency Against Gender Based Violence (OSAA-GBV) saddled with the responsibility at a town hall meeting/sensitisation in   Akure South Local Government informed that the aims and objectives of the programme are to ensure people are enlightened about  the law  to ensure a peaceful society.

Speaking during the programme, wife of the Governor, Chief (Mrs) Betty Anyanwu-Akeredolu posited that GBV is an issue that concerns all and sundry.

Represented by the Senior Special Assistant to the Governor on Gender and  Documentation, Mrs Temitope Daniyan, the First lady affirmed that the law and creation of OSAA-GBV are to ensure rapid response to cases and make sure victims get justice to serve as a deterrent to others.

According to her, GBV is a heart burning issue that has been contributing to a breach of fundamental right to life, liberty, dignity among others, calling on the people to work in synergy with the Government in combating the menace for the  state  to be GBV free.

The Executive Secretary (ES) of the Agency, Bolanle Afolabi noted that the Agency had been to many local governments for the same programme where various stakeholders were represented to ensure full implementation of the law in the State.

While introducing the law to participants, pointing out offenses and punishment contained therein, the ES said the Law makes it a taboo to engage in GBV and ensure maximum remedy to same.

She listed offences of GBV to include: rape, harmful widowhood and traditional practices, indecent exposure, intimidation, illegal divorce, incest, fraud, emotional verbal and psychological abuse among others, saying that some of the offenses not in the criminal code are contained in the new VAPP law passed in July 2021 in  the  state.

She therefore charged the law enforcement agencies to do the needful by enforcing the law and urged participants to spread the message to others to jointly tackle GBV headlong.

The Chairman, Akure South Local Government Gbenga Olaniyi who was represented by the Secretary of the Local Government, Gbenga Fasua described the programme as an eye opener, adding that the local council will fully support it to achieve the set goals.

Copies of the law translated in Yoruba language were distributed to participants just as they took turns to ask questions on the law as well as shared experiences on the issue.