Home Main Bowl VAR and the ruination of the beautiful game 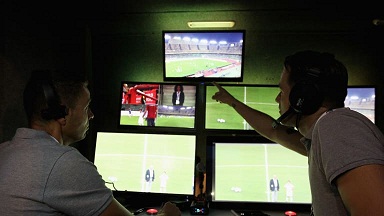 VAR and the ruination of the beautiful game

By Steve Alabi
|
Certain happenings around the world in the last three weeks have shaken the game of football to its foundation. From Nigeria to France, Cairo to Qatar, men of questionable character are at work, hiding under the façades of rules and honesty to dig holes round the game. If care is not taken, they will bring our passion down.

In Nigeria, the NFF remains in the eye of the storm with unending allegations of corruption and self-centered leadership. After failing in their respective World Cups, the Flying Eagles and Super Falcons hit the headlines for the wrong reasons. Both teams reportedly refused to vacate their hotels in protest against unpaid allowances. Back home, the NFF bigwigs continue to play cat and mouse with prosecutors bent on trying them for fraud and corruption. In fact, a key stakeholder, Harrison Jalla, the President of the National Association of Nigerian Footballers, NANF, Harrison Jalla has called on FIFA to dissolve the NFF Board, citing Article 8 (1 to 2) of the FIFA Statutes and the case of the former FIFA President, Sepp Blatter, who was forced to step down while facing corruption charges, to back his claim.

In France, two football personalities, the CAF President, Ahmad and the former UEFA President, Michel Platini, were arrested by the French authorities on fraud suspicions. Both insisted on their innocence but while Platini is breathing easy on the Qatar World Cup bid allegations, Ahmad is already paying a heavy price for his alleged misdemeanors. FIFA has intervened in the running of CAF decisively with the appointment of its Secretary General, Fatma Samoura, as FIFA Delegate to take over the day to day running of the African game for the next six months in the first instance.

Incidents at the ongoing Women’s World Cup in France have vindicated my assertion in March that the beautiful game is being modernized to absurdity. The teams at the receiving end of VAR decisions in the championships feel unjustly done in. There are increasing feelings that human errors may be more acceptable than computer certainty. In only their debut at the global stage, many fans wonder about the usefulness of the new rules; in fact, traditionalists are already nostalgic about the old system.

I had argued then that the rules of the beautiful game are changing at a such a frenetic pace that the inventors of the laws may no longer recognise them were they to rise from beyond. It seems the modern man is more interested in making things more laborious than the good old  man of yonder. The simplicity of the beautiful game has given way to too much technicality. If we are not careful, our passion may become a game played by robots.

Incidentally, African teams were the main victims of the VAR decisions at France 2019. Many Nigerians will swear that the referee of the Falcons’ make or break match against the French ladies was blatantly biased against our team with those VAR reviews. If the Falcons felt unjustly done in against the French, the Indomitable Lionesses of Cameroon must have felt outrightly condemned against their English counterparts whose two of three winning goals came in controversial circumstances. The VAR-aided refereeing stretched the Africans’ temper and patience to breaking points, particularly the Cameroonians who even threatened to abandon the Round of 16 tie. The computer may have been right but there is a sense of injustice that cannot be assuaged by the correctness of the decisions.

Not only Cameroon got angry at Referee Qin Liang’s eccentric calls but also a large section of the Black Continent. Even the FIFA Secretary General, Fatma Samoura weighed in on the side of justice with a passionate tribute to Cameroon on Twitter: “To my sisters the Lionesses. Your participation in the Women’s World Cup has inspired many young girls in Cameroon. Your passionate and talented play on the field has made your fans proud and your country is proud of you.” Beneficiaries of the unjust VAR decisions may accuse Samoura of pandering to ethnic sentiments on account of her Senegalese origins but their criticisms suffer greater defects.

Phil Neville, the England handler threw decency overboard in harshly condemning Cameroon’s protests arising from their frustrations. “That wasn’t a World Cup last-16 tie in terms of behaviour that I want to see from footballers. I am completely and utterly ashamed of the opposition. If that was my team – and it will never be any of my players – they would never play for England again.” What happened to being gracious in victory, one that the opponents feel largely undeserved? The English must be ashamed of their uncouth coach. Is it not the same Phil Neville who in 2002/03 season got carded more than any other Manchester United player in history, despite only starting five competitive games?

Spain were not a little less frustrated than the African teams in their Round of 16 loss to the United States through VAR-aided penalties. The second, from a slight touch that human judgment could not have given, left the Spanish, who scored a goal from open play, reeling with angst. At the end of the Round of 16, the competition had seen 22 penalties, the total number in the last edition!

I am convinced that nothing is fundamentally wrong with the old rules. I do not think VAR adds any value of essence to the game. Rather, it is capable of igniting the ruination of the beautiful game. It is turning players into robots and taking human errors that define the game as one played by human beings out. The old game gave us such great emotional moments as the unforgettable Maradona’s Hand of God goal against England at 1986 World Cup and Victor Ikpeba’s “missed” penalty against Cameroon at AFCON 2000. Such errors make the game human. We must resist the temptation to suffocate this our beautiful game to absurdity.

When teams feel they are not getting justice, the game is in trouble. Is football justice served when VAR dictates replay where the taker misses the penalty just because the goalkeeper’s feet are not on the line, as it happened in the Falcons’ game against France? How do you punish the goalkeeper for the taker’s miss? Even in the dispensation of justice, equity mitigates the strictness of law.