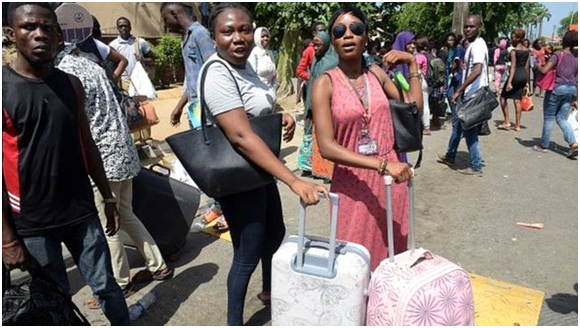 As public universities’ students resumed after the eight-months protracted industrial strike by the Academic Staff Union of Universities (ASUU), another battle is ensuing between them and  landlords demanding rents renewal.

The Hope gathered that some of the landlords had locked the students’ rooms before resumption while some gave the students ultimatum to pay their rents or risk eviction.

Our investigations further revealed that some landlords had also increased rents without any renovation done to the houses, insisting the hostels were their investments.

In addition, some students met their rooms looted and their belongings carted away.

A postgraduate student of the University of Ibadan, Grace Akinwande, told The Hope that she paid N200, 000 as rent for one year and only stayed for six months in the apartment before the strike.

However, her landlord had been disturbing her since July for renewal or she leaves the house despite the strike.

“They called every day to remind me of the expiration date, and I had to call a friend to help me move my things. They don’t care if we are on strike or not. For them, everything is business,” she stated.

A final-year student of Adekunle Ajasin University, Akungba Akoko, Ayomide Richard, said his landlord did not disturb him and other tenants during the strike. Still, they met the hostel locked when they resumed.

“My rent is N60,000 yearly, and before the strike , I paid an advance fee of N30,000, since there’s no strict rule we must pay in full. I have not stayed in the lodge for up to three months and I still have three months rent left, wasted with the strike.”

“I and some of my house mates communicated with the landlord to see if he would have to forgo this year’s rent and start counting from next year, but he said until we return. We don’t know what he had to say.”

“But to our surprise, after we resumed, our hostel was locked by the landlord. He is now insisting we pay our rent before our belongings can be released,”  he added.”

At Ekiti State University, EKSU, one of the students said her landlord had given her few days to renew her rent or move out of the house.

A landlord in Ile Ife, Osun State, Mr. Augustine, said the students had to renew their rents or pack out to other places because “these houses are the means of livelihood for most landlords.”

“We don’t have any option either. The students have to or pack out. It is not about ASUU. It is about our means of livelihood,” he added.

A house agent, Mr. Willams John, said it is in the law for house owners to demand a renewal of rent from their tenants once the rent expires, whether or not there is an ASUU strike.

According to him, “the ASUU strike does not stop landlords from demanding a renewal of rent; whether you are physically present in the house or not. As long as you keep your property inside that room, you are meant to pay and if you can’t, you should move out of the house. It is an investment and it is meant to yield dividends for the owners,” he said.

The Hope gathered that the face off had led to the Students’ Union of AAUA seeking a meeting with landlords in the host community.