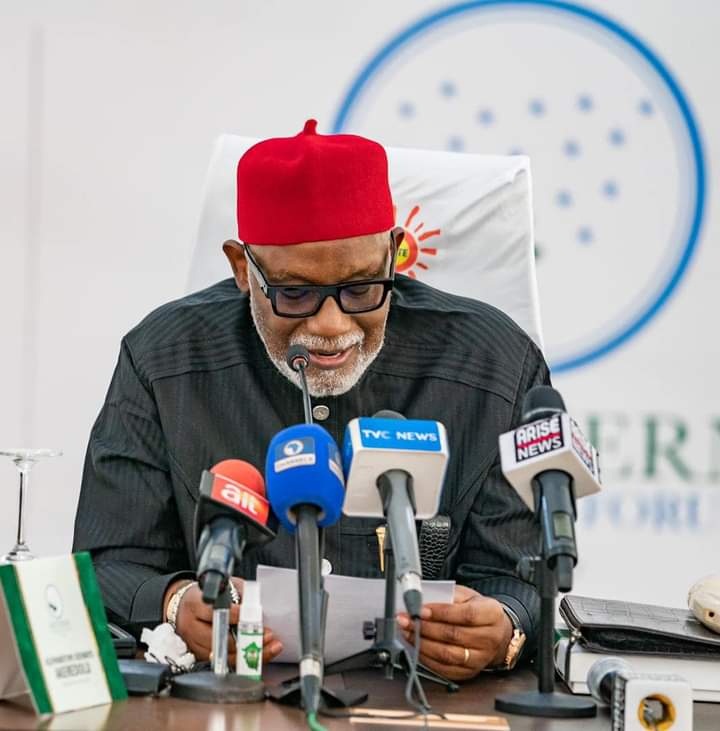 Amendments sought by the Federal Inland Revenue Service (FIRS) at the National Assembly to the controversial Value Added Tax law will be killed at the State Houses of Assembly.
This was disclosed by Governor Oluwarotimi Akerdolu Chairman, Southern Governor’s Forum and Governor of Ondo State.
Governor Akeredolu said the law does not give power to the federal government to collect VAT and share to the states.
He explained that it is the state government that is constitutionally empowered to collect the tax.
“That’s the position of the law. The FIRS seeking for amendment is a confirmation that they don’t have the power. The amendment will be dead on arrival. Why seek an amendment to a constitution when the provision is so clear?” Akeredolu said.
The Governor spoke on ‘Arise TV Sunday Talk Show’ hosted by Reuben Abati.
Governor Akeredolu insisted that if the federal government is to collect VAT for states, it can only get a percentage which it can decide to share at the FAAC.
He said: “You can only collect VAT on behalf of the states and hand their money over to them. You can only take percentage there for helping us to collect the money.”
On the controversy over the Petroleum Industry Bill (PIB), Governor Akeredolu said the Southern Governors’ Forum aligned and agreed with the position and steps taken by the Nigeria Governors’ Forum to pursue the amendment to the bill so as to reflect equity, justice and fairness.
He said his visit to the former Lagos State Governor and National Leader of the All Progressives Congress (APC), Asiwaju Bola Tinubu, in London has nothing to do with the 2023 election, adding that the rumours flying around on the social media are untrue.
Governor Akeredolu, who described Tinubu as the political ‘capo’ in the south, said the former Lagos governor is expected to return to the country soon so as to meet with him and be able to take certain critical decisions.
Asked if he will support Tinubu as the Presidential candidate of the party in 2023, Governor Akeredolu said: “APC is a party. APC will decide who the candidate will be. I have said it several times, I’m going no where. If I leave APC, I am going back to my chamber. For me, whatever APC decides, I will follow.
“We went to London because It was important for us to go and see for ourselves. How he’s doing. He’s the Capo for us here. By the time he comes, we can make some serious decisions.”
Asked whether he has not breached the constitution with the appointment of four commissioners and few Special Advisers since his inauguration for his second term in office in February, Governor Akeredolu said the decision on the number of commissioners to be appointed lies with him.
He said: “There is no provision that says what number. Only the Attorney-General and Commissioner for Justice is stated there. The number of who will work with me will be decided by me.
“Come early next month we will have more commissioners. I’m to determine the number of Commissioners that I will want to work with. Governor Agagu worked with less than 11 Commissioners. I’m not saying it is ideal.
“I will have to put in more people come next month. But it can’t be as many as it was in the first term because the finances of the state is badly affected.”