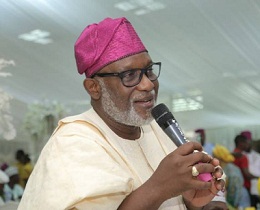 Governor Oluwarotimi Akeredolu of Ondo State has called on youths in the country to venture into entrepreneurship and agribusiness in order to contribute more meaningfully to the nation’s economic growth and development.
Akeredolu made this call in Akure, during the training and empowering of 160 youths on agribusiness in the state.
The governor, who was represented by his Special Adviser on Multilateral and Inter-Governmental Affairs, Bunmi Ademosun said that it was time youths defy all odds and shine with their innovations and creative geniuses.
The six-day entrepreneurship training which was organized for some selective cooperative organisations was aimed to encourage youths, particularly, young farmers to go back to farming and to increase the country’s exportation in order to reduce poverty among youths.
Earlier, the South-West Zonal Coordinator of Small and Medium Enterprises Development Agency of Nigeria (SMEDAN), Shode Olukayode, urged youths to focus on agribusiness and entrepreneurship in order to reduce the alarming rate of unemployment in the country.
He said participants with innovative ideas would be given financial and technical support through entrepreneurship training.
According to him, the training and empowerment programme is a yearly programme and Federal Government initiative to support cooperative organisations saying Ondo and Ogun State were chosen from South West to partake in 2021.
The SMEDAN zonal coordinator, who said all the participants were drawn from the 18 Local Government Area of Ondo State, however, noted that Ogun State was the next state to benefit from the programme.
Also, Assistant Director of SMEDAN, Oluyomi Faniyan said, “FG and states governments are working restlessly to encourage people to go back to farming because this is what has been sustaining Nigeria before the emergence of oil.
“Now that oil has failed us, we must go back to the farm so that we can increase our export. Lack of exportation is what is affecting our naira today.”
Meanwhile, Chairman of Sunshine Co-operative Society in Akure South Local Government, Muhammed Jamiu Enas who spoke on behalf of other participants, however, urged the Federal Government not to relent on the programme so that poverty within the farmers would become a thing of the past and youths could take farming as a job instead of looking for white cola jobs.