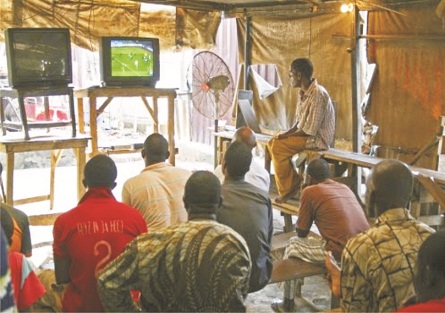 By Bisi Olominu
|
Football viewing centres adorn the landscape of the Country’s cities, towns and villages. From Akure in Ondo State to Lagos, Bayelsa to Imo, Kano to Kaduna, they are at every nook and cranny to wet the appetite of football fanatics every mid-week and weekend with foreign football clubs matches.

Apart from the viewers coming to watch mesmerising and captivating football matches, the occasions are also time to discuss politics in Nigeria and discourse of interest in the country.

We always have at the centres football fans, fanatic supporters, analysts, historians all coming together to add pepper and salt to the matches.

Sometimes, the viewers switched from football to discuss politics which often degenerate to hot argument as party supporters among them pitched against one another. Shouting match ensued for two to five minutes before sanity prevailed, for football is a game of love.

Before the advent of football viewing centres, Nigerians were obsessed with local football clubs. Stadia across Nigeria were full to capacity and football matches were loving to watch. Nigeria Referees were at their best, it was then many Referees without bias and monetary inducement.

During that era, whenever there were local league matches, supporters trooped to the stadia to cheer their clubs to victory. That was the situation, until the late 1990s when Nigerian players started moving into professional football clubs in Europe and elsewhere. The national television brought foreign football to the sitting rooms of Nigerians as a means of entertainment, cultural exchange and globalisation.

This also brought an end to the era in football followership and the beginning of a new era in foreign football followership in the country till date. The ecstatic chant ‘Flamingo’-the nickname of the boisterous Lagos city team, Stationery Stores of Lagos-gave way to ‘Up Blues’, for Chelsea Football Club of England, Barca forever in honour of Barcelona of Spain, Gunners for life in hournor of Arsenal Football Club of England and several others.

To make matters worse, there was the introduction of Digital Satellite Television (DStv) which won many Nigerian fans over and has kept them out of the stadia to the detriment of spectatorship at venues of local league matches.

Then came the establishment of viewing centres, where foreign football enthusiasts and fans can converge to watch foreign league matches. Today, these viewing centres are now at every nooks and crannies of major cities and towns in the country. This phenomenon has continued to grow in leaps and bounds as the fan continue to patronise them to discuss the various issues affecting their lives, country and politics.

The recent ugly incident at a viewing centre in Calabar, Cross River State where no fewer than 30 Manchester United Football Club fans died of electrocution while watching Europa Football league match between Manchester United and Anderlecht has once again raised the questions; why do people prefer watching football matches at viewing centres than their homes? How safe and healthy are the viewing centres? What are the other things that lure people to the centres other than football matches?

Speaking to The Hope, Tayo Oni a student in one of the higher institutions in Ondo State said “I cannot but come to this viewing centre to while away time. Our leaders are stiffing our lives, the country is not worth living again. You enter university today, you don’t know when you will graduate. Those leading us children are abroad, but they are making life unbearable for us. They increase tuition fees indiscriminately; ordinary people could not go to school again. Even if you graduate today, where is the job and I am told that in the past when you graduate out of university, many jobs are already waiting for you”.

“Our leaders have turned the country’s youth to forcaster of football games every week to make endsmeet. So I am here to watch my team, Manchester City winning the FA cup and also to while away time from the burdens of life”.

To Tayo Odunade in Abusoro Akure, viewing centre for him is to watch scintillating football match every week for he has no preferred football club.

“I love the analysis from those I dubbed “fanatic coaches” who are ready to tear themselves to pieces, fight sometimes and later become friends again. Watching this scene is lively to me, staying at home will not make you to see all the happenings. Be it debate on who is the best player in the world between Ronaldo and Messi. Why the coaches of Chelsea have to change the best player on the field?

Contributing to the issue, Gbenga Oluwatuyi is the opinion that viewing centre to him is of watch good football having been a good footballer in his days. He posited that Nigeria’s league is no more attractive as it lacks good sponsors, creative players and intelligent ones.

“What do we have in Nigeria’s league today? Incompetent referee, thuggery and violent in most of our stadiums. These would not allow the game to grow. But foreign leagues are good for me, though they have infractions been committed, but such would be dealt with without resulting to violence”.

Toyin Akande was at the centre to monitor the games he has predicted. According to him, since Nigeria’s leaders could no more provide employment to the teeming youths in the country, he finds solace in betting every week.