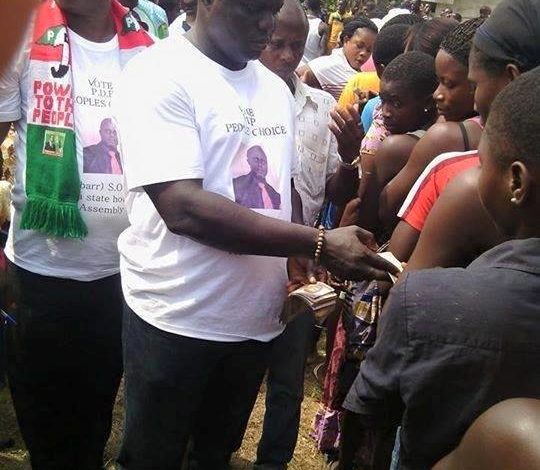 By Fatima Muraina & Jimoh Ahmed
|
Notable Nigerians have predicted a bleak future for Nigerian democracy if the issue of vote buying is not addressed.

Specifically, they said vote buying is like a cancer in the body which if allowed to fester, is capable of bringing democracy to an abrupt end.

The elder statesmen and Afenifere chieftain, Chief Seinde Arogbofa, a former State Chairman of Alliance for Democracy (AD) in Ondo State, Chief Makinde Oguntona, and a political scientist, Dr Lanre Olu-Adeyemi in separate interviews with The Hope noted that Nigeria will not develop democratically if the trend persisted.

Chief Arogbofa, who expressed disappointment on vote buying during the just concluded general elections in the country blamed the situation on government failure at tackling corruption and unemployment.

His words: “What I mean is this, government should not only concentrate on financial crimes, it should also focus on other corrupt practices in all other sectors. If the government is unable to effectively do this, then we are going nowhere democratically.”

Arogbofa explained that the country may find it difficult to curb vote buying without addressing increasing unemployment rate, which he described as the foundation of several ills plaguing the country in the form of insurgency, kidnapping for ransom, ritual killings and robberies among several others.

“Until we provide basic necessities such as gainful employment, affordable education to certain levels and re-orientate people’s sense of moral value, the people will continue to be bought cheaply by corrupt politicians and corruption will continue to thrive. Hunger and kidnappings will also continue to flourish,” he noted.

He posited that the social vices confronting the country would never be over except the economic fortunes of the people improve.

Chief Oguntona said most Nigerian voters have lost their sense of values, adding that their integrity has been eroded. He likened them to the biblical Esau who for a pot of porridge sold his heritage.

He accused the security operatives for not doing the needful to stop or arrest the perpetrators of vote buying while stressing that that was never the responsibility of INEC.

He also condemned the idea of using government funds by those seeking for second term whom he said do so because they have access to the fund.

He called on the people to continue to struggle and keep hope alive believing in God that all will be well. He charged political office holders to be less selfish and to think about the average Nigerians.

For an average Nigerian, Oguntona urged them to trust in God while he called on politicians not to see themselves as next to God when voted into positions and wanting to serve for third term which he noted does not speak well of an individual.

In his own reaction, a teacher of Political Science and the Head of the Department of Political Science, Adekunle Ajasin University, Akungba Akoko, Dr Lanre Olu-Adeyemi said although vote buying has been part and parcel of our electoral system in Nigeria, but has now taken a new dimension with the outright purchase of votes with money.

According to him, people were being given food, clothes, mobile phones and other gifts before to induce electorate, but it has taken a new dimension with inducing voters with cash.

“The truth is that vote buying has been part and parcel of our electoral process for some time now. People were being given clothes, mobile phones, food items and other gifts, but the issue that is new and taking a dangerous dimension is the outright purchase of votes. It has taken such a dangerous dimension.”

Adeyemi posited that if it was not curbed, it will not only kill democracy in the country, but the people as well.

Giving an insight into the causes of vote buying in Nigeria, the University teacher said poverty is largely responsible. According to him, poverty is not necessarily the inability to feed, but that of the mind. However, he has proposed the use of Electronic Voting as a way out of the quagmire. This he said will not only curb vote buying, but will also save the electoral umpire some money.

“The way out is Electronic Voting, although it has its own shortcomings. In about ten years ago, nobody believed we can transfer money on our mobile phones, but it has a resounding success now. We can do that with electronic voting. It will also save the electoral umpire some money”.

Dr Olu-Adeyemi equally suggested a review of the nation’s electoral laws which will stipulate a stiffer penalty on vote buying and selling.

Similarly he proposed that remuneration for elected political office holders should be reduced drastically to avoid the urge of office seekers wanting to get there at all cost.

“Our electoral laws should be reviewed and political positions should be made less attractive”.