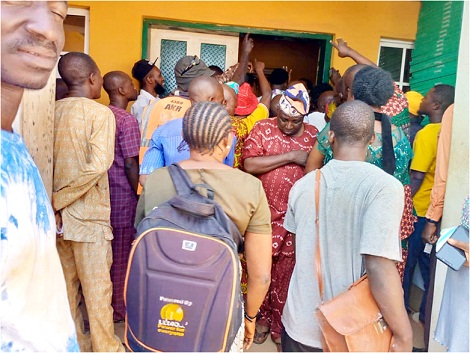 Several registered voters in  Ondo State have lamented the difficulties encountered before collecting their Permanent Voters’ Cards, PVCs, describing the process as cumbersome.

They declared this at the Akure South local governments’ office of the Independent National Electoral Commission, INEC.

Recall that INEC had said Nigerians can start go for the collection of their PVCs from Monday 12 at its local governments’ offices across Nigeria.

Some of the registrants who spoke with The Hope at the Commission’s local government office in Akure South Council called for more decentralization of the PVC distribution centres to ease the burden on applicants.

It was gathered that many of the applicants who applied for transfer and replacement for a damaged or lost PVCs could not find their names on the register list but have their cards with the Commission, resulting to non release of their PVCs.

A civil servant, Mr. Solomon lsaacs, expressed disappointment over INEC for not perfecting the transfer of his PVC from Edo State to Ondo State since 2011 he had been transferred from Edo to Ondo State.

Isaacs, who said he had applied for the transfer of his PVC  four times which did not yield result, lamented that he was wrongly advised by one of the Commission’s staff to apply for registration of new voter’s card that was not available till now.

Similarly, a farmer, Mr. Sunday Udoh, who disclosed that he has been on queue as early as 9am said his PVC was found but was not released to him because his name  was not on register list.

He said he was told to come back early January, 2023 for the collection of his voter’s card.

Also, a trader and new registrant, Mr. Abdulazeez Oniyide, who could not collect his PVC and was told to come for it in December ending said his friends who applied for new PVCs with him at the same time have collected theirs.