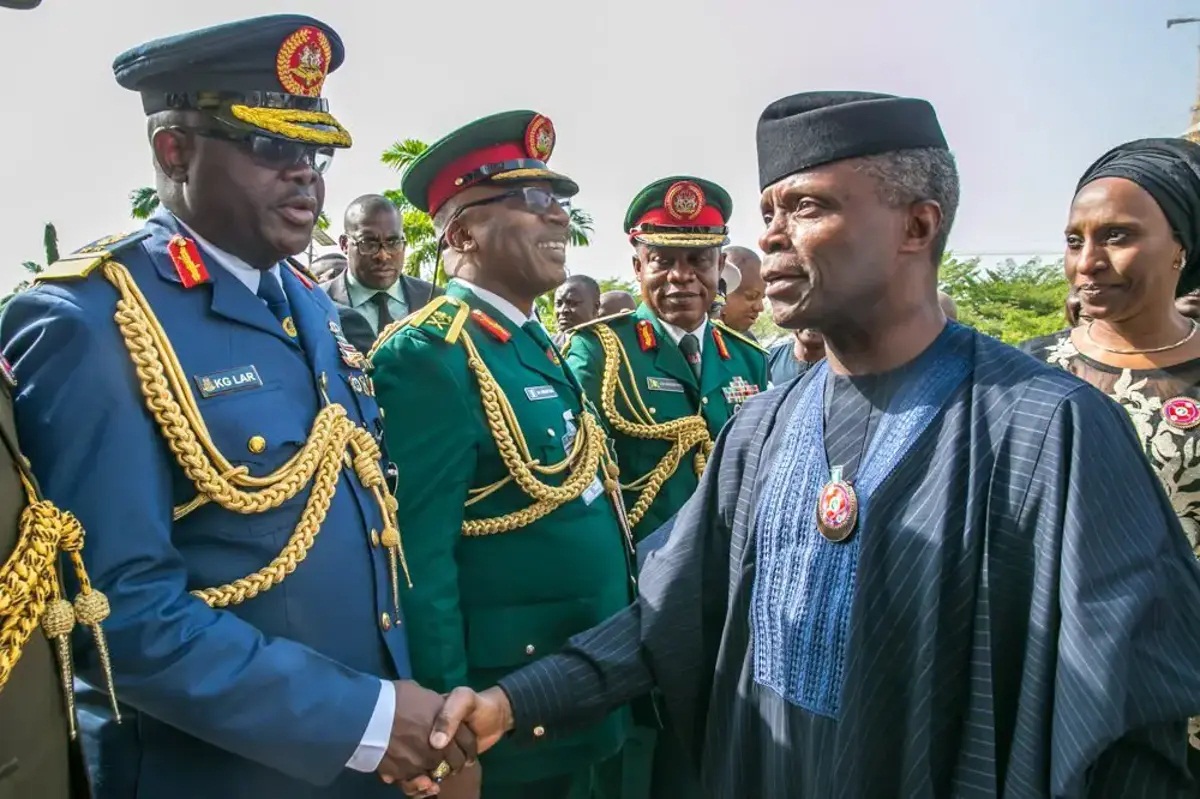 Despite differences in religion, ethnicity, political affiliations, or other diversities, Nigerians of all generations and from all walks of life must endeavour to commit to ensuring Nigeria’s unity.
The Vice President, Prof Yemi Osinbajo spoke on Sunday at the Interdenominational Church Service for the 2021 Armed Forces Remembrance Day Celebration, which held at the National Christian Centre, Abuja.
According to Osinbajo, who was represented at the Church Service by the Secretary to the Government of the Federation, Mr. Boss Mustapha, Nigerians “must at every opportunity insist that every great multi-ethnic and multi-religious nation has, through thick and thin, fought to realize the great dividends of diversity and pluralism.”
He reiterated the need for Nigerians to, as a mark of honour for the sacrifices of the men and women of the Armed Forces show more commitment to the unity of the nation and the task of building a better society.
He noted that the departed heroes and heroines of the Armed Forces “fought to preserve the freedom of the nations of the world from totalitarianism in the First and Second World Wars; to keep our Nation and its people as one in the Civil War.”
Continuing, the VP praised the members of the Armed Forces adding that they “laid down their lives in peacekeeping operations on the continent and elsewhere, paid the ultimate price in the fight against the mindless terrorism in the North East, and in defending this land from other threats to security.
“It is to the memories of these heroes and heroines that we pledge in the words of our National anthem: that “the labours of our heroes past shall never be in vain.
“That promise that their blood, spilled on the field of battle, will not be wasted, is the burden that we, the living, bear. And it is an onerous one indeed.”
In his tribute to the departed members of the Armed Forces, the VP recalled the heroism of the late Ms. Tolulope Arotile, who made history in October 2019, when she was winged as Nigeria’s first female combat helicopter pilot in the 55 years of existence of the Nigerian Air Force.
He said, “although her young life was cut short in very unfortunate circumstances, Tolulope lived her dream to join the Nigerian military and along with colleagues from all parts of this nation, to defend the territorial integrity, peace and security of this nation.
Prof. Osinbajo noted the nation will always be grateful and proud of the continuing commitment of our young men and women to serving in the Armed Forces.
He said “this occasion is also one where we celebrate, honor and pray for the families, relations and loved ones of our fallen heroes, those who daily bear the pain and deprivation of their absence. On behalf of Mr. President and the Federal Government, we once again extend our sincere condolences to you. We pray that the Lord will comfort you and uphold you daily.”