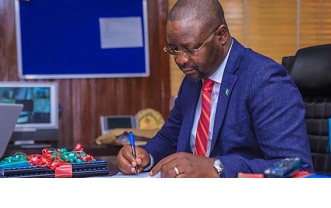 By Steve Alabi
|
Nigerians are anxiously waiting for the Sports Minister, Mr. Sunday Dare to roll out the “very difficult decisions” he promised when he demanded a written explanation from the Nigeria Football Federation, NFF for the dismal performances of our national teams in recent competitions. Many were actually elated when the Minister met with the NFF and interrogated them on the exit of Nigerian teams from football tournaments.

Media reports widely quoted Dare directing the Glass House in a meeting that lasted less than 30 minutes to provide the Federal Government with written explanation to the developments of our teams failing in four major tournaments. “From stock taking, it is now time to render account to Nigerians…We need to run a reality check. Nigerians are not happy with our state of football. We must start with the football administration. Nigerians want to see us working proactively to get things working again.”

The Minister added, “I am not saying we should win at all cost, beyond identifying various issues, what do we need to do to deal with these issues.  The board has a responsibility. I am asking the board to do surgical examinations of what has gone wrong with our football,” he said even as he warned that “We need to take very difficult decisions.”

NFF’s initial reaction came from its President, Amaju Pinnick who lamented that the federation was faced with a toxic situation that affected its administration, whatever that means. Later, it released a 15-page letter signed by Pinnick in which the federation blamed the serial poor outings by the various national teams on inadequate and late release of funds. The football governing body also cited the protracted legal leadership tussle for the soul of the nation’s football and the investigation of officials of the board over what it called “false and malicious” corruption allegations as other reasons for the poor outing of the national teams at various international competitions in recent times.

What do we make of this explanation, in the light of the allegations from Dare and one of his predecessors, Tammy Danagogo that the NFF has issues making money available to the teams in its charge? Is the NFF saying that Dare was economical with the truth when he said, “Nigeria’s performance at the Under-17 World Cup calls for a review. Indeed, our football administration at all levels calls for a review. We must exact greater responsibility from those charged with our football administration. Timely payment of salaries and allowances vital?” How can the NFF’s explanation suffice for the poor showings of the Super Falcons, CHAN Eagles, Golden Eaglets, Olympic Eagles and Sand Eagles in recent international tournaments? How can anyone justify five failures that happened at the same time?

The well crafted letter also argued that the tournaments in which it failed were mainly and strategically developmental and that the best performance indicator for any country in international football is the A team, “in this case Super Eagles, which in recent times drew with five–time world champions, Brazil and Ukraine in friendlies, and defeated Benin Republic and Lesotho in 2021 AFCON qualifying matches after finishing third at the first ever 24-team AFCON in Egypt this year!”

The Minister needs to do a deeper interrogation to get to the root of the matter. The NFF must be made to be truly accountable, not only in terms of how it spends public funds but more importantly on how it runs the national passion. Dare must walk the talk and take those difficult decisions he promised. The NFF cannot have failed so woefully and expect to get away with it. Nigerians are anxiously waiting for the Minister.