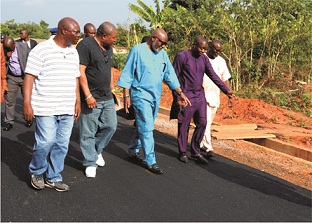 ByAdekola Afolabi
|
Following the ongoing aggressive road construction and rehabilitation across Ondo state by Governor Oluwarotimi Akeredolu, some engineering experts have advised the people of the state to take ownership of public infrastructure in their domains and ensure their sustainability.

Speaking with The Hope on how to maintain and ensure the various road projects being executed by Akeredolu led administration last long,  some engineers with decades of experience including a retired Permanent Secretary in the state, Engr. Alexander Aragbaiye and a former Chairman of Nigeria Society of Engineers, Akure branch, Engr. Babajide Atandeyi, called on the people of the state to avoid unwholesome acts that could cause damages to the government projects across the state.

It would be recalled that Governor Akeredolu has promised to take appropriate steps to ensure that ongoing contracts across the state are delivered in strict compliance with contract details, insisting that his administration would not compromise standard and quality in his aggressive road construction and rehabilitation.

The two experts in separate interviews in Akure the Ondo State capital, listed some of the things people do which cause serious damages to the road and will not make it last long no matter the quality of the project, to include burning of tyres or wood, party cow, pouring of diesel or petrol and discharging heaps of sand on the road, among others.

The duo who cautioned the people against such practices in order to ensure durability of the project to serve the purpose it is meant to serve, equally called for public sensitisation and involvement of relevant stakeholders including Landlords Associations on the correct usage of public infrastructures to ensure sustainability and durability.

They specifically commended the state governor Arakunrin Oluwarotimi Akeredolu for the special attention given to infrastructural development in the state which they said has suffered serious neglect in the years past.

Engr Aragbaiye observed that the bottom up approach of Akeredolu’s aggressive road construction has made various communities enjoyed real dividends of good governance, noting that he is very sure that all the roads would be durable and last long base on the quality standard of the work which he said is line with the engineering standard.

He revealed that the past government only embarked on surface dressed roads where bitumen and chippings would only be applied on the road, as against the asphaltic road construction being done by the present administration.

The retired PS, however, called for correct usage of the road by road users and residents of various towns and communities, and as well avoid dropping of diesel, petrol or kerosene on the surface of the road  which will affect bitumenous materials and cause damage to the road.

“You park your vehicle and petrol/diesel or engine oil is dropping, this is not good for the road. Also, when you have a party and you  kill your cow and start burning it on the road, this is a very terrible attitude. Apart from causing serious damage to the road, the meat burnt with kerosene is not good for consumption.

“Also burning of tyres, especially during students’ protest, all these cause damage to the road. People should also endeavour to desilt drains and avoid dumping waste into the line drains which can cause blockage  of water and make water to settle on the road. So if we can avoid all that all these roads will be durable and last long,” the former PS stressed.

Also, Engineer Babajide Atandeyi, a  former chairman, NSE, Akure, branch, posited that necessary stakeholders must be ready to work with government to preserve and protect public infrastructures in their domains.

According to him, for a project to be sustainable all the professionals involved must work together as a team, from design stage to the execution/completion stage, just as he called for adequate funding of project, saying that contractors and other professionals handling project should be well paid to prevent them from cutting corners which may lead to substandard projects in the society

Engr. Atandeyi while saying government needs to vote certain amount of money for road maintenance, also suggested a Strategic Plan for sustainable and faster development of the infrastructures.

“When you look at Nigeria, you will see that our level of under-development is due to the fact that we have a very wide infrastructural gap. But for government to give attention to this, I will commend government because you can never underestimate the impact of infrastructural development on the economy, development, the citizens, the state and the nation at large,” he said.

He frowned at a situation where people dump loads of sand on newly  constructed roads or parking of truck and other vehicles whose engine oil is dropping or leaking on the road, suggesting that there should be sanction for the bad attitude to serve as deterrent to others.

“We should have infrastructure watchdog that monitors all these infrastructures. How many electric poles have been destroyed by reckless drivers? I have worked through places and have seen how roads are being abused. Look, in the developed countries, apart from taxes, one of the ways by which they make their money is through disobedient citizens. If each of these people is fined say N5, 000 or N10, 000, depending on the gravity of the offense, government will make money, genuinely, and by this we will protect public infrastructures,” he added.

On his part, the Asewi of Gaga Community, Akure, Chief Oluwole Omotosho, who specifically thanked the governor for coming to the aid of the community after many years of neglect by past administrations, said he has called a meeting of necessary stakeholders including elders, Landlords Association and leaders of various groups in the community on the need to avoid anything that can cause damage to the road.

Chief Omotosho described the people of the community as peaceful and law-abiding, noting that by the time the road network is completed the community would set up a taskforce that would be monitoring the road day and night to ensure people do not dump waste in the gutter, burn cow, wood or tyres or park vehicles whose oil is leaking on the road to ensure its durability.