We are afraid of marriage, most girls are hook ups — Men lament 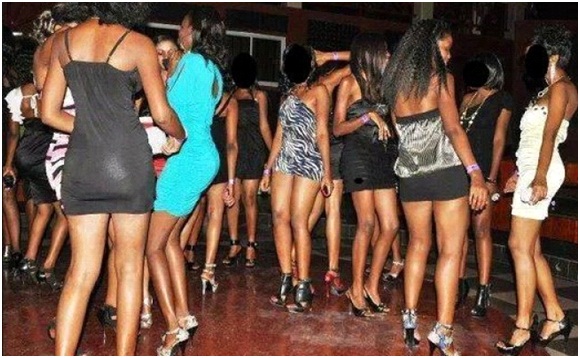 The alarming rate at which young ladies school age girls venture into prostitution is giving men of marriageable age sleepless nights.  Prostitution in the recent time has taken various dimensions, we have the professional prostitutes, escort services, call girls, streetwalkers, massage parlors, those who solicit on the street, brothel prostitutes, campus wives, ‘sales girls,’ live-in lovers (cohabitation) packaged girlfriends those trafficked in search of greener pasture abroad and the list goes on and on.

Men who spoke with The Hope lamented about their experiences with ladies of nowadays, as they claimed that 80 percent of today’s young ladies are either into prostitution or hook ups.

They said majority of them who are in ‘relationships’ do it for economic reasons which may not necessarily end up in marriage, until age is no longer on their side, when the reality now dawn on them to marry, they will be serious about marriage.

The first excuse of ladies going into prostitution is poverty, especially if the lady comes from a poverty stricken background. Young ladies whose parents are incapable of taking care of them and their siblings, tend to go into prostitution so as to make ends meet and take care of their families.

One must not make the mistake of thinking that prostitution is a modern day creation, as evidence showed that in ages past, there were prostitutes.

It is just that prostitution has taken a wider and more alarming dimension in our time. Unlike in the past when prostitution was done secretly, people who are involved in it now parade themselves in full glare of the public and are even very confident to approach prospective clients.

There is now a very high rate of prostitution among teenage girls who see it as a means to escape  poverty, among other factors. Some of them, for one reason or the other, tend to drop the practice as they grow older and seek to settle down for a happy marriage.

Some of the major hot spots for commercial sex workers in Akure include; Alagbaka, front a popular lounge also in Alagbaka, a hotel opposite the Sacred Heart Cathedral along Oba Adesida road.

During the day, these locations look like your regular average street with open space where anyone can go for a drink. At night, they transform into a beehive of activities, where fun-seekers and commercial sex workers mingle freely as they vigorously prospect for clients.

Even though the Nigerian law does not legalize commercial sex, the trade is becoming more attractive to more and more.

According to wikipedia, Nigeria was under British colonial rule until 1960s. Their presence was hardly invisible and they influenced both the creation of prostitution in Nigeria and the stigma that comes with it. One of the bringings that the British brought to Lagos, Nigeria was the cash economy which made the prostitution business possible. Starting in the early 1900s, the rising economic importance of Lagos as a seaport and capital city changed the political and economic landscapes of the city and contributed to the arrival of Nigerians from the hinterland. The demographic and commercial changes also expanded to commoditization of sex and by 1910, commercial sex services had become prevalent.

Investigations by The Hope revealed that a lot of young men are not favourably disposed to settling down with ladies who have had a long spell with prostitution. In fact, that singular fact has been found out to be a reason why some young men seem to be skeptical about going into marriage.

Feranmi Oyedele, a photographer, said almost every young lady has taken up the “hook up” profession, because money is demanded before anything comes in place.

According to him; “there is no love anymore, relationships today are strictly for money. If your girlfriend won’t show you love and attention unless you spoil her with money, she is a hook up girl pretending to be a girlfriend. I’ve met a lot of ladies, they pretended for the first three weeks, after which they showed their true colour, then I realized they are into hook up, it’s so annoying and frustrating to find a decent girl out there that is not into hook up,” he added.

In the same vein, Ayomide Olupona, an entrepreneur, said: “I really don’t understand what is going on any longer, once you ask a girl out and you are ready to be committed, she tells you she’s not interested, just pay, have fun and keep it moving. It’s really worrisome, some of us want to settle down, but who knows maybe who you are trying to settle down with is into prostitution, may God have mercy,” he lamented.

Olusoji Emmanuel, an IT expert said marriage is a life of commitment and It takes a lot of efforts to sustain it and a lot of understanding.

“Why I’m not yet married is because I’m afraid of commitment, I can’t be committed to any lady for now, with the things we see everyday both in real life and on social media. Ladies are not ready to settle down, they just want to be spoilt with gifts, vacations, and the rest, then after wasting their youthful age, that is when the thought of marriage comes in. No man would want to marry a lady almost everybody have slept with. On the other hand, most of these young ladies are victims of circumstances, many of them have been sexually abused as kids and are psychologically imbalance ever since.  There is no going back for them, especially with those who have financial needs and dysfunctional families,” he said.

In the words of Olalekan Tomide,  “80 percent of young ladies have taken to one form of prostitution or the other. It only depends if they are professional prostitutes or packaged prostitutes. The professional ones are those who stay in hotels, bars, lounges, streets for commercial sex trade while the packaged ones are the so-called girlfriends we keep with the false impression that we have a decent clean girl all to ourselves, but unfortunately, when we are away, they sneak out to have sex with other guys and sugar daddies, now tell me how are they different from the roadside prostitutes? If a man is scared simply because prostitution is on the high side, then that kind of man is not ready for marriage,” he reacted

On the contrary, Adegoke Adebiyi, a business developer and a stock broker, said, “even in the Bible, In Hosea 1:2, “The LORD said to Hosea, ‘Go, take to yourself a wife of whoredom and have children of whoredom.”Hosea obeyed, marrying a woman named Gomer, who was unfaithful to him. Why did God tell Hosea to marry a prostitute? Because prostitutes are not less of a woman. Personally I’m not scared, if I end up with a prostitute that is ready to change, yes, I will love her wholeheartedly.

He added “at some point, every woman has been wayward while growing up, everybody has a past, and that doesn’t define who you are presently,” he said.

In the same vein, Isaac Ayoola, a relationship expert, said: “I have once dated a prostitute, and sincerely, a prostitute is the best person to date, because a prostitute does not expect you to remember her birthday, not to talk of buying her gifts. You don’t also have to take care of her responsibilities like buying her body creams, paying for her hair do, buying her airtime, paying for her rent etc. Yet, you still enjoy maximum sex for a little fee which cannot be compared to the expenses you spend on your so-called girlfriend.

My neighbor once told me his girlfriend won’t let him touch her or even talk to her because he didn’t give her a particular amount of money she requested for. If this young man must give her that money before he would touch her then what is the difference between her and the prostitute out there? Just a packaged prostitute in form of a girlfriend” he said

On the contrary, Oyinlola Ogundele, a business woman said: “Let’s cut our ladies some slack please, even the men that patronize them are also culprits. what’s good for the goose is good for the gander.

We need to start teaching all our kids morals whether they are boys or girls, I am afraid this generation has lost it, you picked up a call girl, have sexual intercourse with her and you say you are scared to marry her, that should be the most ridiculous thing ever, what’s sacred about marriage? It is having one sexual partner till the end of time, so having sexual inter course with a prostitute but can’t marry her would never make sense to me,” she reacted