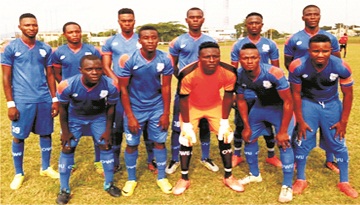 By Femi Atolagbe
|
Rising Stars FC of Akure says they are ready for the challenge of the promotion playoff replay against Kwara United Feeders, after the Nigeria Football Federation (NFF), had  upheld the decision of the NLO summary jurisdiction on the petition written by the Kwara United Feeders over their match  against Rising Stars at the Aper Aku stadium Benue State.

The Organising and Disciplinary committee of the NFF ordered that the match be played today (Friday) at FIFA goal project football field package B’ National Stadium Abuja by 12 noon.

The O and D of the NFF had on Oct.10 announced its verdict on the appeal made by Risings Stars against the decision that the match be replayed because there was no prematch meeting in the original match played at the Aper Aku Stadium on Sept. 8.

Coach Boye Ogunderu of Rising Stars said his team had been preparing without waiting for the outcome of the committee’s decisions.

Ogunderu said his boys did it once,by defeating them 2-1, and expected them to do it again.