‘We are committed to grassroots football’ 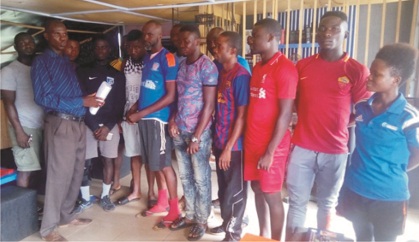 ‘We are committed to grassroots football’

By Femi Atolagbe
|
Our Non Governmental Organisation remained resolute to the development of grassroots football .

The Coordinator of Kunle Tuface Football Promotion, Mr Oluwatope Ayokunle made the declaration during an audience with coaches and participating teams in the forthcoming Ramadan Nations cup and grassroot football competition that will kick start next week Saturday May 18, 2019.

Ayokunle  emphasized on the motive behind the competitions, which  he said,was far from the immediate financial gain, saying it is rather a way of contributing his own quota to get our youths busy and take them off the street .

According to him, “i embarked on this  competition “tagged” Ramadan Nations Cup just to create an avenue for our Muslim brothers to use the opportunity to preach the gospel of Islam to win more souls for the Almighty Allah and to create a platform to educate our youths on why they should do away with social vices during and after the Ramadan period”.

On why he named the teams after African countries football teams, he said,”we felt it’s a means of creating awareness about the forthcoming nations cup and to alert the people of the state and the country that if we develop our talented youths from the grassroots they can fly the colours of the national team in future”

Geoffrey Oboabana, Abe Sunday, Dayo Ojo had all made the state proud at the national teams and they all product of grassroots football.

Earlier ,the team manger of Rising stars Mr Seun Betiku had solicited the support of all and sundry to make the competition a successful .

He lauded the Coordinator for his vision in promoting football at the grassroot .

Betiku said, I’m also  a promoter of grassroots football, we have been able to discover two or three players from this competition that we promoted to the Rising Stars.

Players like Ajayi Raphael , Monday Ekeji are products of these competitions , I believe so much in raw talents”.

He therefore admonished the coaches and team managers to instil discipline into their players , saying even if  a player is better than the likes of Ronaldo and Messi without discipline they can not attain the pinnacle of their career .

We should not see the competition as do or die ,it is not easy to organise a successful competition, we as FA as floated many competition in this state with good back up that was inconclusive.

The Zambia’s coach Mr Karimu Michael who spoke on behalf of coaches assured the organizers of their utmost support and cooperation.