Home General Education We are satisfied with your projects, UBEC tells SUBEB 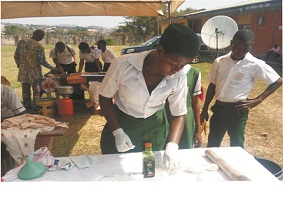 We are satisfied with your projects, UBEC tells SUBEB

The team said it was satisfied with the way the state SUBEB was utilizing the federal government assistance to transform basic education in the state.

The leader of the team, Mr. Ogwueri Osondu ,commended the board for the renovation of a great number of primary schools in the Sunshine state.

Osondu noted that the environment of the schools was more than conducive for teaching and learning, saying Ondo state had set a good template for others states in the country.

He urged the board to continue with what he described as the good job it was doing in order for every child in the state to be educated.

While responding, the SUBEB chairman, Princess Oladunni Odu, thanked the monitoring team for their commendation.

Odu said the massive renovation of schools in the state had significantly increased enrollment in public primary schools.

According to her, the board was able to achieve the feat because of the cooperation of the state governor, Arakunrin Oluwarotimi Akeredolu, and his uncommon interest in the education of every child.

The chairman promised that the board would continue to justify its existence by ensuring that every child had access to basic education in a conducive environment.

She praised members of staff of the board, especially the permanent secretary, Mrs. Oluwafunmilayo Oni, for their contributions to whatever success so far recorded.