Home News Sport We are working on our team’s fitness… 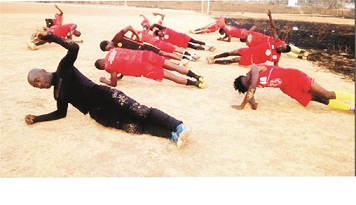 We are working on our team’s fitness,

By Femi Atolagbe
|
In a bid to ensure that EES Snippers Football Club players are in good shape ahead of 2020 football challenges, the team have embarked on both physical and physiological training.

EES Snippers is a grassroots Football Team training at  Ijapo/Housing field, in Akure the State Capital, with the aim of making a point that star footballers can be discover and nurture to stardom from the axis.

When the Sporting Hope visited the team’s training ground at Ijapo Housing field, the players were  seen involving in  all kinds of physical training.

The team Coach, Wole Johnson during an interview revealed that players are preparing for a foreign scout trial which will dunk off in Ibadan in few weeks.

According to him, some of our players are going to Ibadan to participate in the trial and there is need for them  to be in good shape ahead of the trial.

He added: Don’t forget FA Cup will kick off in no distant time and we need to buckle up to ensure we surpass the feat we recorded last year ,when we were dumped out of the tournament by the Nigeria Security and Civil Defense Corps (NSCDC) Football team in quarter – final.

Our team has now be fortified with four additional new players from outside the state ,therefore we need to work on them physically and physiologically.