Home Column We celebrated Eid Kabir to the shame of separatists 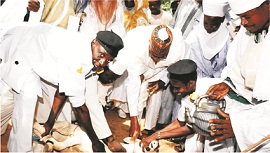 We celebrated Eid Kabir to the shame of separatists

By Theo Adebowale
|
This year Ileya festival was observed in a grand style in our caucaus. For sure it was a special sallah, Tope and Lekan our friends in Local Government Service were hosts. Odun, was bereaved so he travelled home to Okitipupa. It was evening and everybody was reporting at the appointed place, the facilities of Father General. They had made arrangements for service, beverages and mutton. It was soft, it was rich, moderately salted. Doctor counseled me to reduce salt intake, it was like the delicacy was prepared to that specification.

The aroma was good, as if I should have trapped it! Beverages flowed, every drinker was satisfied. It was Korokoro that regretted coming because he had distanced himself from sin for awhile now the wife would surely know he had back slidden and that was due to the influence of Engineer George, his friend of 15years, with whom he had not met for sometime. We strengthened Kokoro in the word, and encouraged him to move forward, always making it his aim to please the LORD. Everybody spent extra time out yesterday. But no one needed special permission as wives granted a free day. They did not need a visa. We reminded ourselves of the significance of the season. Ibraheem trusted Allah and waited upon Him until it was scientifically foolish to expect a valid sperm count. The wife had long passed menopause. That was when Allah proved Himself, only to command Ibraheem afterward to go sacrifice that same child. At the point of human sacrifice, He averted it by providing a ram from no where. He loved God so much, he did not deny Him even his only child. These are admirable qualities we agreed as we gisted, but everybody knew that not one of us could demonstrate them anywhere. This is a matter of concern. It has given me concern since Sunday.

In this ‘get rich quick tradition’, human beings definitely have no trust in their fellow men. Young men and women who complain about inability to secure employment are advised to acquire entrepreneurial skills and start business. They cannot wait. Many of them even emphasize that the uncertainties of the economy and climate change, do not encourage long term wait. Advanced Fee Fraud, cyber crime, money rituals have become a culture. Both the educated and less educated are in the rat race to get rich quick. As for love, it has since vanished. Those who profess love to themselves end up betraying one another. An educated young man turned his dazzling babe to money rituals. No trust. No love. The elders are no better off. Foul means are employed to get the boss off the way so someone can get elevated. Those of them in private business adopt sabotage, assassination and other foul means to obtain undue advantage.

Business transactions have become a different ball game. A gentleman came home to start a training center. He acquired some land to start a building project. A team of men came to introduce themselves as chiefs, and forbade him to start work. The land had been vested in a traditional ruler, whom he had to follow them to repurchase it from. In some place. some urchins come around to impose their land use charge. These are instances where sellers are genuine. Land speculators abound in many places selling the same plot of land to several buyers. For a simple transaction, one needs to do a thorough check before investing to avoid embarrassment and disappointment. In this land, where there is no love, trust has since disappeared. Many attribute this to dwindling economic fortunes, but some of us know that it is a product of disappearing social values the Yoruba refer to as omoluwabi. Ibraheem trusted his God so well, and loved Him more than he loved his only legitimate son that God saved him from committing murder, or making human sacrifice. Many of the people who celebrated the sallah yesterday would sacrifice anything to get rich quick. They have no trust in hardwork and there is no love in their veins. Some celebrants in their various joints have distorted the original doctrine of their book, and signed up for fanaticism adopting abduction, kidnapping, suicide bombing to plunder and break limbs and lives. They compel men and women, boys and girls to join in the dispensation of their trade in stock.

In our land, where trust and love are fast disappearing, no agency or institution is spared. Criminal elements have penetrated the institutions. The temple of justice has been infested. Officers of the law at all levels can no longer be trusted not to desecrate the temple. Any surprise that in spite of demonstrated religious piety injustice pervades the atmosphere. Peace, twin sister of justice, has been discounted. Security agencies comprise practicing Muslems and born again Christians collect a fee under the sticker ‘bail is free’ before they grant bail to any suspect. They still observe the 5 pillars of Islam, and Christians among them are neck deep into untoward activities. Our soldiers are known to be hard such that no civilian would risk an argument with any of them on duty. Nevertheless, they are reputed for professionalism. Nigerian soldiers and policemen return from peace keeping assignments with commendations and medals making Nigerians proud. This attests to their efficient communication skills and espirit the corps. But one disaster in Taraba State and it seems the communication gadgets and skills have disappeared! And, with them, trust and love!

The political class is another thing entirely. Goodwill messages in well crafted language flow from this group endlessly during festivities. So also do they dish out funny often unimaginable policies. Legistlation targeted at corruption was frustrated in the past Assembly. There was budget delay, budget padding. Now they have moved higher, and President Olusegun Obasanjo has proved himself a pace setter earlier. He published so many facts about his Vice-President, and granted interviews in local and international media cautioning Nigerians against offering him leadership position any more. That stand was pushed by Dr. Olusegun Obasanjo essentially from 2007 to 2017. But suddenly and in a dramatic move, Baba Iyabo announced to Nigerians that Alhaji Abubakar Atiku had repented and had also come to beg him. So on behalf of 200million Nigerians, Obasanjo forgave Atiku and directed the electorate to vote him President. The outcome of that election is in the public domain. A little while after, the National Chairman of the ruling party asked those in the other party undergoing trial for corrupt practices to change over and have their sins forgiven. Today at least two of those who yielded to the clarion call have not only been forgiven, they are now Ministers of the Federal Republic. That is forgiveness Political. For the common man it is difficult to identify those who are expected to trust the system or benefit from love.

Please tell Mary that majority of those feted by Tope and Lekan at Father General’s place yesterday were Christians. Nobody remembered to confirm that trust was boldly in operation among them and you must be there to confirm that they love themselves dearly. We saw them last Christmas, no one bothered himself or was concerned about another’s religion. To Tope and Lekan obe o ni se le. This is a platform to expand, to cultivate trust, love and good citizenship. It can help in nation building.