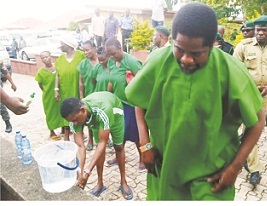 By Sunmola Olowookere
|
In contradiction to the belief in some quarters which went rife some months ago that the DSS had exhumed the corpse of Eninlaloluwa Gold Kolawole from the altar of Sotitobire Praising Chapel, a prosecution witness from the DSS has told the court that it was not part of their duties to exhume corpses.

The prosecution witness, Yomi Olabiyi, a Senior Intelligence Officer of the Department of State Services, DSS, Ondo State Command was brought to testify before the court as the hearing in the case resumed on Monday.

He said that he works in the investigation department of the agency and that he knows the defendants as he was one of those who recorded statements among five of the defendants after he had charged and cautioned them to only make voluntary statements.

He said that the first defendant, Alfa Babatunde made his statement in the presence of his lawyer, one Akinyemi Omoware Esq and detailed to help record the defendant’s statement.

He testified further that after the first statement, the first defendant also desired to make additional statement to the DSS.

He said that the lawyer later declined appearing which had affected obtaining the additional statement on time until the service of a legal aid counsel was provided.

Prior to this, he stated that the legal department was informed of the need to invite his lawyer to witness the additional statement.

A drama ensued at this point as the lawyer, Akinyemi Omoware who represented all of them before but now represented only the 5th and 6th defendants objected to the line of evidence by the witness and claimed that he lied against him.

He demanded that he too would be allowed to give evidence in the case so he could clear himself.

The witness further said that a legal aid counsel, Abdulsalam Elias Musa served as witness while they recorded the additional statement of Alfa Babatunde and other four defendants too.

As the prosecuting counsel made an application to tender the first, second, fourth, sixth and seventh defendants’ statements before the court, all the four defense counsels raised objections.

Counsel to the first defendant, Olusola Oke while objecting to the tendering and admissibility of the documents, cited section 12 of evidence act which states that before the statement of a defendant could be taken, a legal practitioner of his choice must be provided while placing emphasis on “of his choice”.

Citing relevant authorities, he said that the statements ought also to be recorded according to the provisions of the Administration of Criminal Justice Law.

He urged the court to reject the document sought to be tendered or admit it on the condition that it would be admitted and ruled on later after hearing the side of the defense.

He said that the hearing of the side of the defendant would show whether the DSS deliberately did not notify their lawyers and foisted a legal aid counsel on them or they did the needful.

In reaction, the prosecution said that the section brought by the defence had a provision at the tail end of the section 12 which stated that if the defendant had no lawyer, a legal aid counsel could be provided.

She said further that the DSS had obtained the permission of the defendants before a legal aid counsel was provided for them which fulfilled the second provision of the section 12 of the evidence act.

The prosecution immediately sought to withdraw the document which the court allowed.

However, the presiding judge, Justice Olusegun Odusola while ruling on the first statement of the first defendant, Alfa Babatunde had admitted it and marked it as an exhibit before the court.

The other defence counsels ; Olumide Ogidan holding the brief of Remi Olatubora who represented the third defendant, Akinyemi Omoware representing the 5th and 6th defendants and Olalekan Akinrinsola representing the 7th defendant aligned themselves with the submission of Olusola Oke while raising their own objection to the admissibility of the client’s statement.

At the end of the testimony, the court was able to admit five statements; the first, second, fourth, sixth and seventh defendant’s statements.

During cross-examination by Olusola Oke who said different information are flying about regarding his client, the witness said that he had not mentioned during his testimony that they exhumed corpse from Sotitobire’s church.

Although he was advised by the court to restrict himself to the testimony of the witness, he asked the question again saying that some facts needed to be cleared up through the hearing.

The witness then said that it was not the work of the Department to exhume corpses.

As the court had already proceeded on Easter recess, the case was then adjourned till 27th April, 7th and 11th May, 2020.