We ‘ll discover ourselves with more games—Sunshine Stars coach 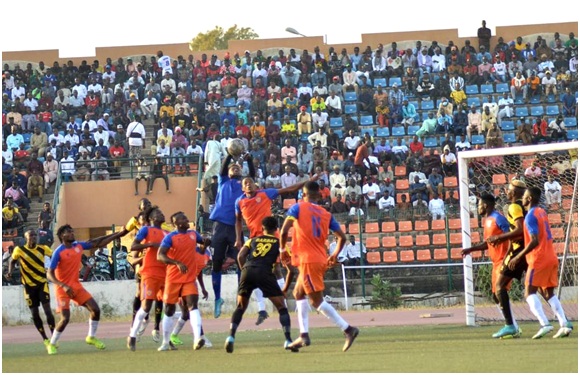 Sunshine Stars Head coach, Edith Agoye has said his team will discover themselves game by game, saying they saw some positives and areas to improve on in their first game of the 2022/23 Nigeria Professional Football League.

He said: “We were able to change the cause of the game with the substitutions we made,we are a team in progress and going forward we will make the necessary improvements.”

The coach stated this after his team played 1-1 draw with Doma United FC in the group B of the 2022/23 Abridged league match decide at Pantami Stadium, Gombe.

He said: “We are happy for the game, not only because we were able to pick a point away from home, but because of the attitude of the boys; they gave everything they had and compensated for the fact that it took us a long journey to come to Gombe, we didn’t want to go back empty handed.

“It’s not enough for us to be confident but we have to be able to do the job that is necessary for us to win against Rivers United.

“They will not be an easy team to play being the defending champions but Sunshine Stars is a strong team and we know our strength. The boys are ready to go and we want to compliment the away draw with a home win.”

Ibrahim Yusuf had strike late to hand Sunshine Stars a share of the spoils away at Doma United.

Charles Chibuike grabbed the opener for the hosts off a free kick in an eventful first half that saw a lot of goal mouth actions and brilliant goalkeeping, more notably from Sunshine Stars goalkeeper, Mustapha Lawal.

Sunshine Stars gaffer, Edith Agoye rang the changes to a great effect in the second half and change the cause of the game with the introduction of Lawal Muritala, Stephen Chukwude, Jide Jimoh, Michael Olalusi and Seun Olulayo intermittently.

The boys picked up the intensity late on, and were able to peg back the Savannah Tigers at the death, through a crucial debut goal from Yusuf who guided home from Emmanuel Ogbuagu’s ball to silent the home crowd at the Pantami Stadium.

Agoye cut a relief figure seeing his side emerged from the Northeast with a point on day one of the season and the former Shooting Stars handler is eager to compliment the result with a home win against holders, Rivers United today.