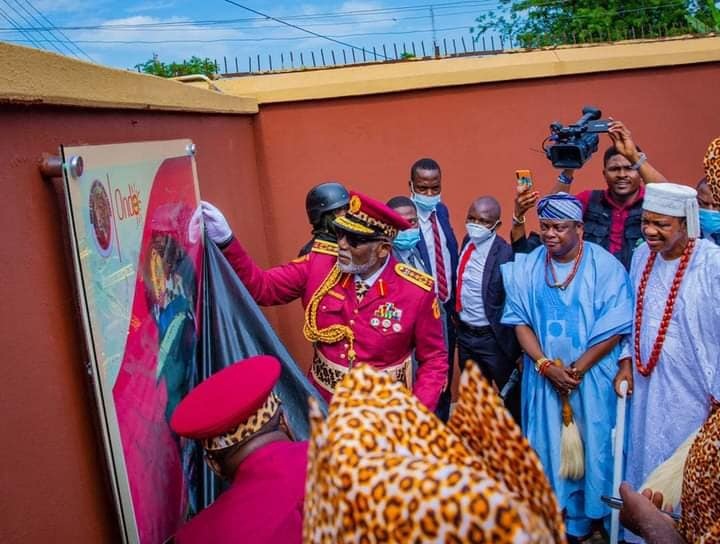 Ondo State Governor, Oluwarotimi Akeredolu on Tuesday said crime is a local issue that should be addressed with a large dose of home-grown content.
The Governor noted that Amotekun Security Corps initiative is a baby of necessity conceived as a home-grown approach to solving the plethora of security challenges that have put the people on the edge.
Governor Akeredolu stated this at the passing-out ceremony for the newly recruited Amotekun Corps officers held at the Gani Fawehinmi Freedom Arcade, Igbatoro Road, Akure, the state capital.
The event was part of the activities marking the first 100 days of Governor Akeredolu’s second term.
The Governor also commissioned 20 new patrol vehicles to boost the operations of the state security network.
He unveiled the Roadmap to Internal and Border Security in Ondo state, assuring that the state shall become the safest and most secured in the country if the strategies contained in the roadmap were religiously implemented.
Arakunrin Akeredolu said Amotekun’s impact has been remarkable, adding that the security outfit has also given the people of the state hope in the management of security, despite that it came into being just a little over a year ago.
“It has further reinforced our long time view that State and community-based policing is the panacea to the country’s security challenges.
“Let me reassure the good people of Ondo State that our administration will leave no stone unturned as far as the implementation of our Redeemed Agenda is concerned.
“The sixth goal of the Agenda which is “Maintenance of Law and Order for Adequate Security” is the reason why we are here today. I enjoin all the good people of Ondo State to lend your cooperation in terms of providing credible intelligence and financial support towards the success of this initiative.
“Today’s event is one of the milestones recorded by our administration in our attempt to redeem Ondo State from the shackles of poverty, disease, and underdevelopment. These cannot be achieved without a sense of safety and peace,” Governor Akeredolu said.
He commended the leadership of the Security Agency for the brilliant work put into the roadmap, promising that he will always provide the right leadership for the Agency to flourish.
Governor Akeredolu appreciated members of the State House of Assembly for their tireless legislative support in making Amotekun a reality.
He also thanked the traditional rulers for their immense supports and cooperations and the leaderships of all the security agencies in the state for their cooperation in tackling security challenges.
Welcoming dignitaries to the occasion, the state Commander of Amotekun Corps, Chief Adetunji Adeleye, thanked the governor for creating enabling environment for the security outfit to succeed.
Adeleye, who is the Southwest chairman, Commanders of Amotekun Corps assured that his men will not relent on their oars in the discharge of their duties as he said they had been fully trained.
Other speakers included; Chairman, Ondo State Council of Obas and Olugbo of Ugbo Kingdom, Oba Frederick Akinruntan and the Director General of the DAWN Commission, Mr Seye Oyeleye applauded Governor Akeredolu for his firm and total commitment to security of lives and properties of the citizens in the South west region through his various courageous and fearless steps.
Highlights of the 3-in-1 event included inspection of Quarter Guard by the Governor, March Past/Parade Demonstration, Hunters’ Demonstration, Documentary and Drama on Amotekun, Review Order, unveiling of Mr Governor’s Portrait and unveiling of Roadmap to Internal and Border Security in Ondo State.