We ‘re best in workers’ welfare –HOS 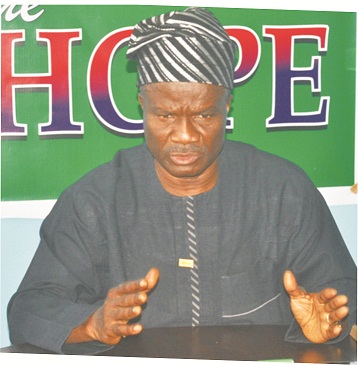 By Olusola Alatise, Evelyn Omotoye & Kayode Crown
|
Despite the current economic crunch and paucity of fund, the Ondo State Government has been described as one of the few states in the country still paying workers’ salaries promptly, as and when due.

This is the position of the state Head of Service, Mr Toyin Akinkuotu while featuring in an interview with The Hope.

He told journalists that available records across the country singled out the state as the only one still paying leave bonus and implementing other welfare packages.

Not only these, he added that the state has not retrenched a single worker.

Akinkuotu described Governor Oluwarotimi Akeredolu as a messiah sent to the civil servants in the state judging by his performance in the area of welfare.

His words: “Ondo State is presently one of the few states that promote workers as and when due. Many states have stopped promotion and payment of leave bonuses because of its financial implications. They see these as unnecessary payments to civil servants.

“Workers were owed seven months salaries arrears before the governor’s inauguration. Owing workers seven months was like telling them to go and die. Presently, the government has almost offset all the arrears, apart from not owing salary. Governor Akeredolu is God-sent to Ondo State as unfolding events have shown.

“In the last few years, there has been no single year without promotion for civil servants in the state, those who were due for promotion this year have received their letters, no retrenchment of workers in whatever guise even when we noticed over bloating of workers in some cases, we redeployed them to where they will be useful like the case of Ondo State Radiovision Corporation, OSRC.

“Welfare of workers in Ondo State is impressive compared to others”.

On his retention as HoS by Governor Akeredolu, as against the practice in the recent past, Akinkuotu attributed it to God and the forthright thinking of the Governor, describing himself as the first Head of Service in Ondo State to serve two democratically elected governors of opposing political parties.

“The magic is God for being retained as Head of Service. Head of Service is  a political position and this is not supposed to be. It is statutory to retire at 60years of age or after 35 years in service and I am yet to get to either of the two but the trend in the Nigeria of recent times is the opposite.

“I had already parked my luggage being the only man standing in the previous cabinet. I was not bothered because I had seen it all, but surprisingly, I was retained.”

The number one civil servant in the state described Ondo State civil servants as the best in Nigeria in terms of capacity, intelligence and being apolitical.

He said Governor Akeredolu has encouraged discipline in the state civil service by not giving political appointments to any civil servant, saying that action alone will make civil servants to be neutral, dedicated and diligent.

Akinkuotu said the State civil service has been restructured to make civil servants reach the top of their cadre irrespective of whether they are in the teaching service or local government service or even at the parastatals.

Sharing his vision for the service, he said he wished to model the state civil service like those in Singapore and Malaysia which drive the countries’ economies and are apolitical.

On the dearth of teachers in the state public schools, Akinkuotu said government is addressing the issue as he assured that solution is in the pipeline.

He described the Public Service Training Institute, Ilara Mokin as the best in Nigeria and sub Sahara Africa in terms of infrastructure, saying arrangement is on by the government to ensure that the mission and vision of the Institute is achieved.