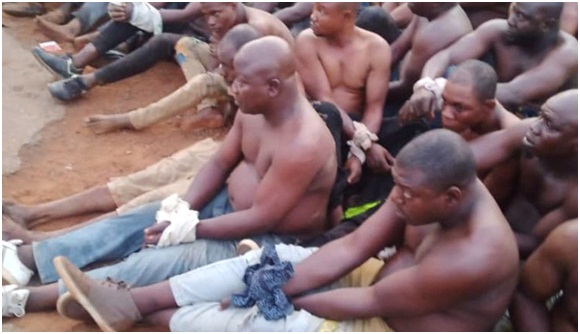 Some suspected political thugs recently arrested by military officers at the border town of Ita Ore in Efon Local Government area of Ekiti State have narrated their ordeals during the seven days of their captivity.

They spoke to our correspondent at the premises of a Chief Magistrate Court in Ado-Ekiti shortly after they were paraded and granted bail by the court.

The suspects said that the ninety-eight persons arrested by the military were of two groups called “Aseyori” and “Majiyagbe” and they were all political thugs from Ibadan, the capital of Oyo State working for a prominent politician in the state.

The leader of ‘Aseyori’ group gave his name as Jamiyu Opaleye. He said his members who were made up of commercial drivers, artisans as well as motorcycle operators, on the fateful day received a message through their WhatsApp group platform to converge at the popular Iwo-road in Ibadan for a journey to Ado Ekiti to support a particular candidate in the People’s Democratic Party (PDP) during their primary election.

He said their mission was to go and wreck havoc and to unleash mayhem on members of the party and others in support of one of the aspirants during the primary election held on Wednesday, January 26, 2022.

Opaleye said his group who were fifty in number came in six commercial buses, while other group forty-eight in number came in five commercial buses  also moved from Iwo-road in Ibadan on the fateful day at about 1:am enroute Ile-Ife/ Efon-Alaye before they were intercepted by the military men at about 3:15am at the border town Itaore, Ekiti State.

Describing their arrest as very unfortunate, he said immediately they were intercepted by the military they were whisked away from the scene to the 32-Artillery Brigade Barrack in Akure, the capital of Ondo State, where they spent three days before they were later handed over to the police at the Ekiti State Police Command.

On their experiences at the Akure Military Barrack, Opaleye said they were dumped at  open space within the barrack with their two hands tied together and subjected to inclement weather condition, but were later locked in two rooms in the night.

“About fifty of us were locked in a room with thirty men capacity and they brought us out early in the morning, exposed us to unfriendly weather, with our two hands tied to our backs as if we are terrorists.

“Similarly, at the Ekiti State Police Command headquarters, we were locked up in a room, though there was good ventilation, but we are only served us  loaf of bread in a day, no water to drink after the bread.

When asked their experiences with the two security operatives, he said “the police were friendly with us and sharing experiences and jokes with us, but the  military men didn’t joke with us.  They dumped us in a place without attending to us, they couldn’t obtain any statement from us.”

‘But the police informed us immediately we were handed over to them, that we should be patient that we might likely go to court, that is why we are here, we thank God we were granted bail,’ he narrated.

During their arraignment at a Chief Magistrate Court in Ado-Ekiti, the police told the court that the ninety-eight persons committed offense of threats to violence; embark on unlawful procession and illegal possession of firearms.

The police prosecutor, Mr Samson Osubu, told the court that the defendants committed the offence on January 25 at Itaore along Efon Alaaye highway between Osun State and Ekiti State border.

He said the defendants went with arm in the public without lawful occasion in such a manner as to cause terror.

He also alleged that the defendants, while in eleven vehicles did embark on unlawful procession from Ibadan, Oyo State, heading to Ado-Ekiti for the PDP primary election.

According to him, the offences contravenes sections 516, 80, 88 and Section 4 and punishable under section 27(b) (c) of Firearms Act Laws of Federation of Nigeria (LFN) 2004.

The prosecutor asked the court for an adjournment to enable him study the case file and assemble his witnesses.

The defendants, however, pleaded not guilty to the charges preferred against them.

Similarly, their counsels, Mr Odunayo Okunade, Busuyi Ayorinde and Chris Omokhafe, respectively, urged the court to grant them bail, with a promise that they would not jump bail.

The Chief Magistrate, Mrs Titilayo Ola-Olorun, in her ruling, granted the defendants bail in the sum of N100,000 with two sureties each in like sum.