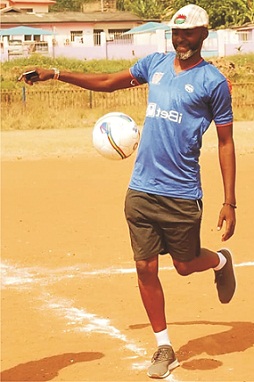 By Femi Atolagbe
|
The Chairman, Kunle Tuface Football  Promotion, Mr Oluwatope Ayokunle has said his organisation has embarked on staging grassroots football in the state to encourage youths on the need to take soccer as a serious business.

Ayokunle who revealed this to Sporting Hope during an interview in Akure said it is imperative to engage youths through Sports to reduce the high rate of social vices in the society.

He pointed out that his organisation intended to let the government know that there are lots of talented youths in the State that can be promoted to represent the state in the Nationwide League One (NLO) and Nigeria Professional Football League (NPFL), instead of taking our resources outside the State to scout for players .

He said, “eleven years of our competitions has produced a lot of talents in the State which includes; current Sunshine Stars players, Seun Olulayo,former Owena Whales player,  Kehinde Adedipe who is  currently plying his trade with Rivers United, Bankole Adekuoroye in Slovakia.

The duo of Ayo Adejubu and Tobi Adedayo who are now in Sunshine Stars FC among others”.

He noted that his organisation has a very good relationship with the State government, that is why the last Easter competition he organised was tagged “ODSFA Chairman’s Cup”.

“Our organisation is committed to the development of grassroots football in the state and we shall continue to add our quota to it. Our passion is our driven force , we are not looking for the immediate gains, but the future results where we can boast of having our players in the National team and other foreign clubs”.

“We are convinced that government can not do it alone, that is why we are calling on well to do individuals and corporate bodies in the state to join hands with us to develop the game of soccer in the state.