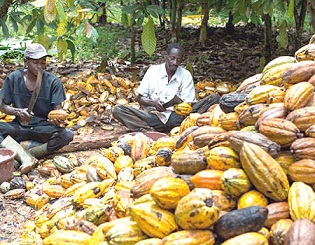 From Jimoh Ahmed, Owo.
|
Ondo State Governor, Arakunrin Oluwarotimi Akeredolu is committed to ensuring that the Sunshine State regains its lost glory as the leading cocoa producing state in the country.

The Senior Special Assistant on Agriculture and Agricultural Business, Akin Olotu stated this in a chat with newsmen during the One-Day Sensitisation/ Training Programme held for New Breed Cocoa Farmers by the Cocoa Revolution Project of the state government at the Rufus Giwa Polytechnic, Owo on Thursday.

Olotu said the government through the Cocoa Revolution Project is set to make the state the leading producer of Cocoa in the world by conceptualising a new model cocoa farm concept in cocoa farming.

The SSA, disclosed that under the new model, participants of the training programme will be placed in the model centres where all necessary facilities will be put in place as a way of making life easy for them as farmers.

According to him, the state government will provide all social amenities like good road, accommodation, internet facilities, modern health centre and police post among others for the use of the participants and inhabitants of the model farm estate.

Speaking in the same vein, the Secretary of Cocoa Revolution Project, Mr Toba Adenowuro said the Cocoa Model Farm is to reduce the challenges of cocoa production and to plant new ones to replace old ones which are dying and yielding low output.

Adenowuro said it is the state government’s measure of ensuring that the state maintain its leadership position among cocoa producing states in the country.

This he said become necessary when it was realised that the plantations in the state are getting old and other states which plantations are younger may eventually catch up with it and lead in production scale.

He posited that it is also a measure of encouraging youths of the state to engage in the money making aspect of farming.

Meanwhile, the president of Sunshine Cocoa Farmers Organization of Ondo State, Engineer Ogundare has commended Governor Akeredolu for the initiative.

Ogundare said the project is sure to make Ondo State the leader in the world of cocoa production.

He therefore charged participants to take the training seriously as they have right in their hands a ready money spinner that can earn them millions.

He appealed to them to be focused, dedicated and committed to the project.