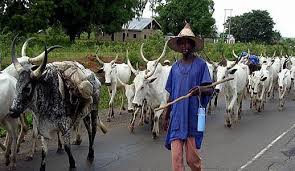 By Kehinde Oluwatayo
|
Farmers in Ondo state have expressed  dissatisfaction with the activities of Fulani herdsmen who continue to destroy their farms without restrictions.

Narrating the ordeals of  farmers, Chairman of Ondo State Agricultural Commodities Association (OSACA), Mr Gbenga Obaweya said so many farmers  have been  calling in to share their experiences.

He said “I am also a victim even though it wasn’t anything heavy but we even have members of our exco that have their farms burnt by herdsmen.

“Even the chairman of the National Palm Produce Association of Nigeria, Mr Adetula called me 11pm  in December that his 35hectares oil palm farm  which has not been harvested had been taken over by some herdsmen.

Obayewa said the people were helpless so to say because if they try to confront them, it might turn to something bloody and that  has been  the story in so many places.

“Recently, we tried to put a jingle in place in the media to encourage our people to call in and  on  these cases  so that we can take it up with government and so many called.

“But unfortunately, there is nothing concrete we are able to do for them because they expect that as soon as they called us, there should be a quick response but unfortunately there was nothing  to  offer”.

When asked about the committee put in place by the state government, Obaweya said that the representatives of the farmers have attended the meeting twice, adding that it has been discussion without actions.

Obaweya who called on government to take action said they have written to the Speaker, House of Assembly that people might be forced to protest or do something because people cannot invest and have their investment destroyed.

He called on government to put a regulatory law in place and part of which must be no more open grazing adding that people should confine their cattle.

Another farmer, Mr Idowu Oludare said his plantain and cassava farm worth over N500,000 was destroyed by herdsmen.

While describing the experience as devastating, Oludare said the destruction was not limited to his farm and that a seven-hectare tomatoes and beans farm was also destroyed in his area.

The Senior Special Assistant to Ondo State Governor, Arakunrin Rotimi Akeredolu  on Agriculture and Agri-business, Mr Akin Olotu in his reaction said government has done a lot to ensure peace reigns between farmers and fulani herdsmen in the state.

According to him, the governor called a meeting ” and in the meeting, all the leaders of Miyetti Allah were there and the governor told them in an unmistaken language that he  could not  tolerate the destruction of farms  and  kidnapping.

“He made it abundantly clear that his primary assignment is security of lives and property.

Committees were set up, according to him at the state level and in all the local governments where the governor gave a directive that the committees should be functional.

Olotu however advised that nobody should take laws into his hand but report at the nearest police station. “Make sure the case is  reported, take photographs and be on the look out.