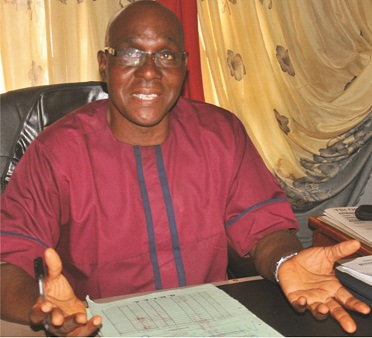 Haruna Gagara is the Ondo State Commander of the Nigeria Drug Law Enforcement Agency (NDLEA). In this interview with TOLA GBADAMOSI, he speaks on why Ondo State is a fertile ground for the cultivation of Indian Hemp, how many culprits have been convicted, and on other issues.

Why is Ondo state a fertile ground and notorious for the cultivation of cannabis as shown in the global world map today?

The command has equally traced more cannabis farms, yet to be destroyed because of the rough terrain and lack of logistics hampering our job. We are making every effort that the farms are located and destroyed.

Do we still have Skuchi in Ondo state?

Thank God that we have got to the end of skuchi in Ondo State for now, because we have been able to arrest two major dealers who were distributing the substance at places like NEPA area in Akure. One of them have been convicted and sentenced to two years imprisonment. While the other is still undergoing trial.

I think after our efforts at ridding the state of the drug, we are experiencing some calmness around those places. That is not to say it has been completely eradicated. This is why I am using this opportunity to plead with the general public to assist us with information of such locations.

Who are the benefactors of this illicit trade?

The benefactors of the cultivation of cannabis in Ondo State are mostly invisible.

However we know that farmers of this evil crop are mostly non residents of the state. Some lands owners lease their farmlands to the cultivators. Even some communities’ heads offer protection. As a result of this, money bags and some politicians are their backers.

The press, I believe, have a duty to unravel the benefactors and sponsors.

Has your command nabbed any community leader backing these barons?

Not of recent. Not since I resumed, but in the past we have made arrests of community heads collaborating with barons in some communities.

What has been the effort of NDLEA in curtailing drug crimes in the state?

We carry out public enlightenments in schools, motor parks, and communities. We also enlighten the general public on the dangers inherent in drug abuse and cultivation, particularly, drug abuse,  because when you are able to enlighten those who take these substances, they will know the consequences of taking them and staying away from these nefarious activities.

Then the problem of demand and supply will take place. So far, we have been able to do much between May and October.

The command has also recorded 13 convictions of drug offenders.

So far, this has been our effort to suppress supply and reduce demands of the illicit drug that are cultivated in the state.

So, by suppressing the supply of drugs, the agency will cut off the distribution chain thereby preventing circulation and use of illicit substances by miscreants, thereby forestalling criminality.

Dealers and cultivators are enlightened on the dangers of drugs and prosecution of the unrepentant ones among.

Most importantly, we target the youth in both secondary and tertiary institutions, the women group, road transport workers and others. And these remove them from among those who use harmful drugs and restores them to be useful members in the society.

Talking about rehabilitation, how many have you been able to rehabilitate and how many do you still have in your custody?

As a matter of fact, we have counseled so many drug users that were apprehended at scenes of operations.

When we go out for operations, we arrest a lot of suspects.  When we bring them in here, we discover that lots of them are users. There are people that go there to buy and smoke. So, we refer such users to our counseling unit where they are counselled and seriously warned before they are released.

People who need help. As a matter of fact, they’re sick because they’re already drug addicts, so, we need to help them. That’s why we counsel them. We also prosecute the dealer who is distributing.

We also have clients admitted in our rehabilitation facility, usually brought in by their parents or guardians and they are kept here for sometime. We also have counselled quite a number since I came in. I think successfully, we have counselled and discharged about four or five from May to October and presently we have six clients in our facility who are undergoing counseling and rehabilitation programme.

Your advice to the people of Ondo State?

Well, I’d like to advise those cultivating the illicit weed in the state that they should think of an alternative business.

They can cultivate cash crops in the state, cannabis sativa is a prohibited drug. It is listed under the schedule 1 of the prohibited Drug list of the United Nations Convention 1988. It is an illicit drug regardless of the fact that some countries have legalised it for medicinal and recreational purposes, and even, it is still prohibited nationally.

Even in America, it is not legalised nationally because a school of thought  has not really convinced us that truly what they say is to the advantage of everybody.

So, until the whole world agree that yes, it is true, we still have to abide by the law. A consequence of consuming the weed is high/enormous, ranging from physical consequences to social, psychological and economic consequences.

It also affects vital organs, causes mental problem and even results in dropout from school, truancy and our youths are no longer serious with their studies. Even workers who take it over a long time will no longer be productive. So, I want to advise them to please desist from this unlawful activity. Drug business is very lucrative and can be tempting and to go back when you start is always difficult.

So, they shouldn’t even go into it because the end “result is their arrest and prosecution and what you’ve acquired through this illicit business will also be confiscated and forfeited to the Federal Government. The youth should stop taking drugs, alcohol and cigarette.

A person will think he can just take it and leave it, meanwhile he can’t and he will now get to the second stage which is the social stage. They take it at social gatherings, even at burials nowadays. They shouldn’t listen to their friends telling them to take it. By then, they will now be a regular user.

Gradually, one will now move to the last stage which is the addiction stage. At that level, that person will not want to leave the drug.

The person will not function properly except if he gets the drug. At that time the person would not care about the school activities or work and even family. All he would care about is how to get or supply the drug. So, the person can go to any level including stealing and armed robbery.

They must always be assertive to friends who tell them to take drugs and also say no to them. They need to use their strength to do whatever they want to do, not on drugs.

Many parents these days don’t care about their children. What they care about is  money. So, their attention is more on their work and their businesses. They have to look after their children, their religious activities, meet their needs but not to pamper them. We must scrutinise whatever our children are doing or what they want to do.

Let the parents conduct surprise search on the room where the children live, when they are not in the house and search the room thoroughly. Search even the pockets of their clothes. When you find something like matches and lighters in the room, what are they doing with it? Observe your kids, look at their behavioural pattern. Are they changing? A child that used to be brilliant in school, is he/she declining in academics? You should suspect that something is wrong.

If a child doesn’t tell lies before, but now lies, as a matter of fact, lying is synonymous to drug abuse. When they begin to look untidy, ask questions, it’s a signal that something is wrong and don’t just relax doing nothing. He was somebody that used to be very clean but when you entered his room and saw it scatted suspect him.

Why is this my son or daughter not taking care of the room,? “but they don’t care because the drug is beginning to affect their lives. So, parents must listen to their children. Show them love and punish them when necessary.