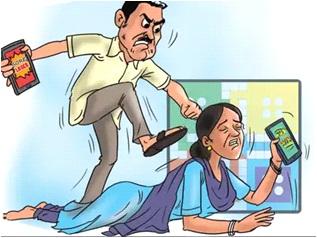 Not many men can condone adultery. That was the case too with kunle, God rests his soul, when he discovered that his wife was cheating on him, it broke his will and sense of humanity. He lost his legendary cool and became a beast overnight.

It was a huge blow to his ego and self respect when he discovered that his wife was having affairs with other men in the neighbourhood.

Asides the fact that his heart was broken because he professed to love his wife dearly despite the fact that he was no saint himself, he told anyone who cared to listen, his self pride was also bruised.

He married his wife, Victoria as an orphan. Then she was all alone in the world except for her younger sister. They lived simple lives in the house their father built before he and their mother met with untimely death in a ghastly motor accident which left their children as orphans.

Then Victoria had just finished her Ordinary National Diploma and was hoping to gain admission into the university while her sister had just written her Senior Secondary School Certificate Examination.

Their parents’ death truncated all their education plans as the family members were not helping despite their tearful promises after their parents burial. So they had to fend for themselves.

It was few years after this that Victoria met Kunle, a self made young man but he was 10 years older than she was. He was very caring and he helped with so many heavy burden which made the young girl’s shoulder to droop.

She was happy and relieved. Soon she was swept off her feet by Kunle’s persistent wooing and she accepted his proposal.

For the first ten years of their marriage, they were like Siamese twins. Where you see one, you are likely to see the other. The wife was looking relieved and she was able to send her younger sister to the university.

Things began to go wrong when the devil reared its ugly head in their paradise. The husband started receiving reports of his wife having affairs with other men in the neighbourhood especially guys younger than him. This drove him crazy and he began to hit his wife until she had to flee for her life along with her children.

She claimed that her husband had become a beast and she might be killed.

He might kill her if she continued to live with him. All efforts at reconciliation failed as the couple showed no interest in coming back together.

Things got worse when the husband became sick and he was diagnosed with diabetes. All attention were shifted to saving his life. Even then, his wife refused to come back to him despite all entreaties to come back so she could take care of her husband.

His mother had to take her son back to their village so she could take proper care of him. Alas, every effort failed and he died from the complications of the disease.

He was buried amid much sorrow as many people believed that grief over his wife’s infidelity contributed largely to his break down.

What is the way to a woman's heart; money or love?