Home In Our Neigbourhood Who is a man of God? 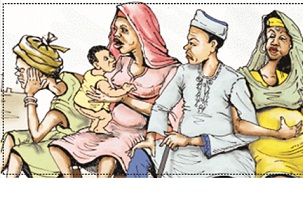 Who is a man of God?

By Sunmola Olowookere
|
Churches are springing up everyday in nooks and crannies of our society. Most people go to church programmes more than they attend to their official duties or businesses, still the spiritual needs of the people are not met.

They listen to sermon yet they found it difficult to change from the evil of their ways. This is probably because they have no role model. They worship their pastors, yet they soon discover that the idol they placed on a pedestal had a feet of clay. This is because most of the spiritual leaders  preached one thing and do another.

Their followers who listen to them sometimes are adrift in their life situations when faced life challenges as they found out that they have no one to mould their life after. Pastors preach against something and they are discovered to be doing the very thing which they preached against.

In this scenario, the church members become confused and do not know what to believe again as they place their prophet’s preaching side by side with his actions.

Truly, he was not happy in his marriage. He was always at loggerheads with his wife and for the major part of their married life, they lived like mere neigbours.

Trouble began when the wife built a house without her husband’ s knowledge or consent. The day the husband discovered this secret which she thought was well hidden, hell was let loose in their household.

He asked her “how could you do this? And you call yourself a minister of God. How could you build a house without telling me?”

The wife knowing that her game was up tried to bluff her way through “well, now that you know, all is well. There is nothing to hide again.”

Her nonchalant answer angered her husband who was really upset about the issue. The prophet saw red and he pounced on his wife with blows and kicks. Not only that, he also threw out her things and told her never to come back to his house.

Although the neighbours tried to pacify him but he was adamant in his decision and insisted that he already had enough of her troubles so she had to leave.

She left along with some of her properties for her fathers house. It took almost a month before their families could settle the disagreement between them and the woman moved back to her husband’s house.

They lived together in relative peace again. Though it was not all sweetness and light as the couple easily get on each other’s nerves and the wife nags at the slightest provocation.

Six years after the major quarrel, the husband was able to secure a hilly land where they built their church. He began to spend inordinate long periods in seclusion on the mountain and he would come home by month end only to leave after spending few days at home with his wife.

The wife was not happy with this development although she too goes to the mountain to spend some days with her husband. In the midst of it all, the ministry boomed and they were able to build a mini cathedral.

The prophet who now spends most of his time on the mountain and even sleeps there has gotten another woman as  wife. This development is generating diverse controversies within the fold.

While some are of the opinion that he had no choice to do what he did so that he would have some peace of mind, others felt that as a man of God, he should have persevered some more and prayed for his wife to change her ways.

Whatever happened to the patience, forbearance and peaceful living that the man of God had been preaching?

It was few years after the ministry boomed that the husband married another wife who lived with him on the mountain and he  directed that his first wife should live in their house downtown. He had built a mission house in the church premises where he lived with the new wife.

The first wife now lives alone as all their children were in higher institutions. As revenge, she has also vowed not to attend the church again until her husband comes back to her.