Who is MKO Abiola? 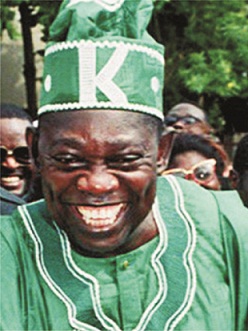 Who is MKO Abiola?

By  Sunmola Olowookere
|
“Mummy, who is MKO Abiola?”. My teenage daughter asked me for some weeks now, the excitement of the June 12  reinventing and celebration by the Federal government is all over the media. After learning of the attention being paid to the day and MKO Abiola, she was wondering why the honour was given to the memory of a deceased stateman, which gave the federal government the reason to declare a day as a holiday in his remembrance.

I was momentarily taken aback at her question. How could she not know about MKO Abiola?  He who fought and paid the ultimate price in a bid to entrench our democracy.

I replied her with another question. “Do you really not know who MKO is?” She shook her head with a puzzled look on her face. It was obvious that she was wondering what was so special in the personality of Abiola.

Then it dawned on me that the legendary June 12 election of 1993 took place almost three decades ago. Due to  the absence of history in the Nigeria curriculum, the upcoming generation probably have no inkling of the most wanted president that Nigeria ever had. A pharaoh that did not know Joseph had emerged.

And if care was not taken, the memory of Abiola’s struggle and sacrifice would soon go into extinction. Those years in the early nineties are ones which could not be forgotten in a hurry. Sweet are the memories of an almost liberation Nigerians had waited with bated breath and huge expectations for the coming on board of Abiola as he had promised the people tremendous development as soon as he assumed power.

When he came on to the political scene, the driving sentiment, support and scale of his campaign were collectively so overwhelming that when Nigerians went to the polls on June 12, 1993, it seemed the outcome was only a matter of protocol.

It is a known fact that elections in Nigeria, from the pre-colonial era, have always been marred or at the least, influenced by rigging and violence at various levels.

There were minimal reports of violence despite a massive turnout, one of the largest by percentage of registered voters in Nigerian history.

When the results were released, it became clear that pre-election sentiments were right on the money. MKO had secured a resounding, overwhelming victory over Tofa,  his opponent from NRC and even defeating the latter in his home state.

With 8.3 million votes and 53.6% of the total vote count as against Tofa’s 5.9 million votes, MKO was not  declared the winner of the election.

It was a very joyous event as both young and old alike danced in the streets.

However, the euphoria was meant to be short lived. Things began to go very very wrong. No one can ascertain the specific reason why this happened many reasons were put forward. Some speculations; some real.Alas, it happened. Many believe that it was the day democracy died

Critics claimed  that Babangida had promised Abacha the seat of power in exchange for the army’s support in months around their 1985 coup and with the clock winding down, the ruthless Chief of Defence Staff had come calling for his end of the bargain to be fulfilled.

Since independence, federal power had been held, for the most part, by Northern officers and politicians. With a Southern Muslim introducing the dawn of democracy and civilian rule, the existing power structure was believed to be threatened.

Several other reasons were put forward on why Babangida proved hesitant to announce Abiola as the winner of the elections.

After massive pressure, he seemed ready to do so, but a few weeks after the results were  being announced, IBB annulled the June 12 elections.

In a  broadcast to the country, Babangida claimed that the process was flawed.

“I, therefore, wish, on behalf of myself and members of the National Defence and Security Council and indeed of my entire administration, to feel with my fellow countrymen and women for the cancellation of the election. It was a rather disappointing experience in the course of carrying through the last election of the transition to civil rule programme”.

Following this declaration, the nation was thrown into disarray.

Violence erupted in many cities, especially  Lagos people took to the streets in protest.  Followers of Abiola called for the presumed winner to claim his mandate and stick to  the people’s voice in the military’s face.

In a speech made to the country, Abiola read his intent to millions of Nigerians who were anxious to know what would come of the power tussle.

“It is inconceivable that a few people in government should claim to know so much better about politics and government than the 14 million Nigerians who actually went to the polls on June 12.

“The people of Nigeria have spoken. They have loudly and firmly proclaimed their preference for democracy. They have chosen me as their president for the next four years. They have determined that August 27, 1993, shall be the terminal date of military dictatorship in Nigeria.

“On that date, the people of Nigeria, through their democratic decision of June 12, 1993, expect me to assume the reins of government.

“I fully intend to keep that date with history.”, he said.

Some victories must be had, however late. The events that followed were some of the most storied in Nigerian history.

By the end of the year, Abiola was languishing in prison, where he passed away on July 7, 1998. Sani Abacha took power from Babangida, after the latter all but fled, to his residence in Minna.

Today, Nigeria is in the 20th year of the longest democratic dispensation in its history, called the fourth republic.

It took over 20 years and three Heads of State to acknowledge a date that ultimately led to the birth of this democratic dispensation.

President Muhammadu Buhari, in recognition of the sacrifice made by MKO  assented to the Public Holiday Amendment bill.

The Senior Special Assistant to the President on National Assembly matters (Senate), Senator Ita Enang, made the disclosure to newsmen after the signing ceremony. The new law allows public holiday to be declared on June 12.

The step taken by President Mohammed Buhari is a laudable one which would ensure that the name of Moshood Abiola do not go into extinction. Though some critics have accused him of doing it late but it is never late than later.

History must be told to the upcoming generation about the valour and courage of our heroes gone past. They too  need to learn from these sterling examples.

There was no way that the history of Nigeria democracy would be told in a complete form without a mention made of Abiola and others like him.

His ilk laid a platform upon which other upcoming democratic leaders could build on. The upcoming generation too must be made aware of those who paid even with their blood for the democracy which they now enjoy.