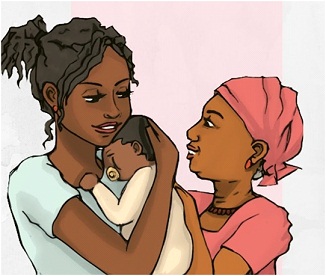 Joy and excitement always greet the birth of a new born baby in any family especially if it is the first child or the first male in most climes of the world. People welcome a new child into the family in a unique way that has become a culture among them.

As soon as a child is born, caring for the new mother and child becomes a priority to both the mother of the woman who just gave birth and her mother in-law.

This is because it is generally believed that when a woman newly put to bed, she and her baby need adequate care for strength. The baby’s mother during this period is expected to rest due to the rigorous labour put into the delivery of the baby. Likewise, the new born baby also needs adequate attention which cannot be left for the mother alone.

Due to this, most culture if not all support the idea of an elderly experienced woman preferably the mother of the woman who just gave birth or her mother in-law to take up the responsibility pending  the time the mother of the baby and her baby will overcome the fear that comes with the critical six months after childbirth.

After six months, it is expected that the baby’s mother would have been stronger to care for herself and the baby. As good as this logic may sound, findings revealed that some women who just gave birth have preference about who should come to nurse them between their biological mothers and their mother-in-laws. They spoke with The Hope on their choices.

An Akure based civil servant, Mrs Adenike Babawale, said that she would choose her mother any time any day because of her closeness to her.  “I prefer my mother and she has always been coming to care for me whenever I put to bed. Though, my mother-in-law also comes around but there are things I can tell my mother to do for me and she will do it joyfully which I dare not try with my mother-in-law.

“For instance, when I had my last child three years ago, I had complications that almost took my life. My mother and mother-in-law were around but it was my mother who did all the house chores including backing my baby at odd hours because the baby would not have sound sleep if not backed while my mother-in-law enjoyed her sleep.  I can go on and on. So, I prefer my mother to come around to care for me and my baby.”

Sharing a similar view,  a trader, Mrs Maureen Agwu, who has a seven months old baby also preferred her mother. She disclosed that  her mother-in-law almost caused rift between her and her husband when she was invited to take care of her first child. “This is what we call “omugwo” in my local parlance.” She explained.

Her words: “I prefer my mother to my mother-in-law and I will advise women to always go for their mothers. When a woman just gave birth in Eastern part of the country where I came from, she is exempted from doing anything except breastfeeding the baby and receiving well wishers who come to rejoice with her. I believe that is the culture in most places. This however was not the case when  my mother-in-law came from the village at the arrival of my first child. She made me to do everything including washing her clothes after serving her food. She even called me to attend to my baby anytime she cried.

“I complained to my husband but he supported his mother. What pained me most was that my mother-in-law despite all I did then to satisfy her still reported me to my husband that I served her food late. I would back my baby to sweep, wash the plates, bath the baby, wash my baby and my mother-in-law clothes. I had no time to rest because I also go to the market. I called my mother and complained to her, she advised that I should come and rest in her place. My husband initially refused me to go because she said that no one would look after his mother until his friend, a medical practitioner, warned him that I needed some rest to avoid serious consequences.

“I traveled with my baby to my mother and my mother-in-law went back to the village. When I had my second child seven months ago, I did not invite my mother-in-law and I told my husband that should his mother come, I will run away from home with my two sons. My mother came and she took good care of me.”

Also a  Seamstress, Mrs Rejoice Augustine, maintained that inviting one’s mother-in-law to care for one after giving birth to a baby is to prepare to nurse two babies while combining the house chores.

She said: “One’s mother still remains the best option in this regard. Most women who invited their mother-in-laws after giving birth have bitter tales to tell. It is then they will become monitoring spirits watching how you eat, how you spend money. My mother-in-law  came last when I had my second child and I never made such a mistake of inviting her when my last baby was born. Though, she  comes to visit but not to come when I have baby.”

Her words: “I am very lucky to have a mother-in-law who is kind and full of love. Not that my mother is bad but I will go for my mother-in-law. She nursed me when I had my three children. Though my mother too was around, my mother-in-law would be the one to cook, wash my clothes, my babies’ clothes and took care of my mother as well. My mother is too principled and a perfectionist,  so I try to avoid her. I do to my mother-in-law what my mother will not take. We are so close that people hardly believe she is my husband’s mother. She is such a pleasant woman.  At times, she would be the one to settle quarrel between me and my own mother. She will never support my husband if he is wrong and never pry into my marital affairs. I am blessed to have her” she said.

She said: “I have a different story to tell about mother-in-laws. Mine is a rare gem who offer useful advice to sustain my marriage. She is always the first person I call whenever I put to bed. She would bring different things all the way from Ibadan for me. She is so caring and loving. She is an exceptional woman. The same way she does to her other daughter-in laws.

“My mother is good as well  but she is too old to care for a woman who just put to bed. There is limit to what she can do. In fact, she can no longer travel unless I go to visit her with my baby. It is because my mother is good that God compensated me with a good mother-in-law.

“My husband at times jokingly asked his mother who is her biological child between me and himself because of the love his mother shower on me. I can’t ask for a better mother-in-law. She is loving, caring and ready to do anything for me without complaining. God bless my mother-in-law for changing the narrative,” she said.

Also responding to the topic, a 76-year-old grandmother, Mrs Yewande Omobori, stressed the need for mothers and daughter-in-laws to embrace each other instead of seeing themselves as rivals as she shared her experience.

She said “To the glory of God I have three males and a female who are all married. To respect myself, I don’t go to the house of my male children whose wives still have mothers when they give birth. This is because my experience showed that  daughter-in-laws will always prefer to have their mothers with them when they put to bed. What I did was to visit them two days to the naming ceremony and go back to my house two days after the naming since her mother was there to look after her and the baby. If my daughter-in-law so wished, she may decide to visit me after her mother has gone back to her house.

“I want you to understand that no matter how a mother -in-law tries to please her son’s wife, some will always complain because of the general mentality that mother-in-laws are bad. They should not forget the law of karma, since they have males who will later get married which will place them in that position of mother-in-laws. Parents who train their husbands should not be termed witches.

“Though, there are some wicked mother-in-laws yet, it takes two to tango. Once you get married to a man, you should try to cope with his mother. If wives can see their mother-in-laws as their mothers, they will become best of friends. I will advise that if any mother notices that her son’s wife who just put to bed is not comfortable with her presence,  such should go back to her house in the interest of peace because no matter how good women are to their daughter-in-laws, some will always find faults. That is the generation of children we have,” she advised.