Home In Our Neigbourhood Who wants ‘Mike Tyson’ for a tenant? 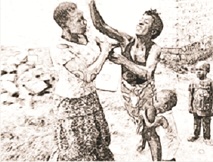 Who wants ‘Mike Tyson’ for a tenant?

With Sunmola Olowookere
|
The dread of every houseowner is to rent out apartment to troublesome tenants. If they don’t have an issue with their fellow tenants, it would be with the house owner.

In our neighbourhood, a landlady is going through a difficult patch. She was recently widowed and was struggling to get by on her meagre means which was more depleted following the burial of her husband.

Presently, Mama Victoria’s toothache is her tenant. The tenant, Funmilayo takes trouble in double doses and its with no side effect. She is never affected by any rancour or fight. She has the strength to take on three women at the same time.

She  does menial jobs; fetch water or carry mixed cement and sand for bricklayers on site.

She is as strong as an ox. She is never tired to react to any provocation no matter how slight it is. Her neighbours have developed the knack of avoiding her. No one can ever predict what could provoke her. She is in a polygamous marriage.

She was impregnated by a bricklayer she worked with. Rumours had it that they “did” it on a site one day when passion ran hot between them and their son, Adedapo was the result of that dalliance and the link that joined them together as man and wife.

The first wife had three girls already and the bricklayer welcomed a son with all happiness.

Hence he spent some days with her. However wqyen she starts her trouble, he would stay away for weeks for his peace of mind.

She is undiluted trouble. And whenever she is riled, everyone would hear of it in the neighbourhood as she carries on in her shrill voice.

This time she is on the warpath with her landlady. She is determined not to pay any money to her. She claimed that she had paid rent to her late husband when he was alive.

The man died in January and the two rooms and a parlour with adjoining kitchen and toilet was shared among the children.

The man who died at the age of 75 was unlucky with women. He married four women and four of them bare him a child each.

The first son was given the half plot in front of the building.

The daughters got a room each.

This landlady in this context was the mother of the last born; a six year old girl and since she was still underage, she managed it for her.

Trouble reared its ugly head when the women who was expecting the tenant to was unpleasantly surprised when she discovered that her tenant  had packed out without paying some months rents. Her anger was kindled against her tenant.

She was eager to recoup the money she had spent during her husband’s burial. Being the last child, her daughter by tradition was mandated to bring a goat for the “family”.

The mother had to buy the goat as the child was underage.

However, the tenant claimed that she had paid rent to her deceased husband and that if she needs the money, she should go and get it from him.

The dread of every property owner is leasing his or her property out to a troublesome tenant. If the owner of the property is living on the same property along with the tenant, then the dilemma is more.

Her landlady was already spoiling for a fight when she discovered that her tenant had packed out.

She believed that it was a ploy by the tenant to avoid paying the remaining part of her rent. However, the truth of the matter was that Funmilayo left due to fear of the new tenants that other “landladies” had given their rooms out to. The two families were from calabar and they took a room each.

Funmilayo claimed that she did not want any trouble, hence the reason she packed out as soon as the calabar people packed in.

She moved to another house on the next lane. Her landlady who was determined to get money back went to her new house to demand for her money because she had called Funmilayo severally but she did not pick the calls.

As soon as she saw Funmilayo and asked about the rent, all hell broke loose as they exchanged heated arguments.

The landlady accused her of lacking good manners. “How can you tell me to go and collect money from my dead husband? You are mad? I will collect my money today. In fact, I am not going anywhere again”

The tenant too gave back as good as she got.

“So you want to collect money now. You want to reap where you did not sow. Is that how it is done? When Baba was alive, you left him to die lonely. Now you have the effrontery to ask for money when he is not even cold in the grave, you are wicked.

The landlady was incensed, ” who told you I left him lonely? Was I not here to wash his clothes and cook for him? Do you know why I was not living with him? You are poking your nose where you should not. Be very careful “

Deftly, she snatched Funmilayo’s handset and told her that she would not get the phone back until she paid the rent. A scuffle ensued and Funmilayo held the landlady’s blouse in a tight grasp.

A few handfuls of neighbours and passersby intervened and settled the matter for them and Funmilayo’s baby father agreed to pay the money by the following month.