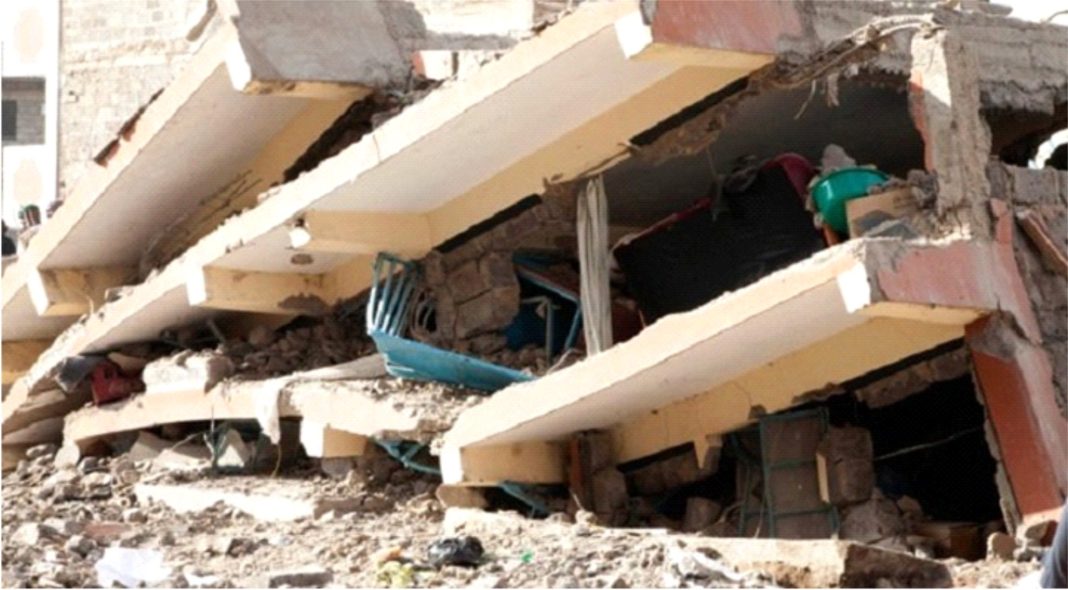 A 52-year-old Ademola Lawrence died in Okitipupa in Okitipupa Local Government area of Ondo State after a dilapidated school building collapsed on him early in September. A landlord tried to help pull down one of the dilapidated structures at the L. A. Primary School, Okitipupa to make way for a new structure, but while work was ongoing, the building suddenly caved in on the carpenter, killing him instantly, witnesses reported.

On September 4, no fewer than six persons got trapped in the rubble of a seven-storey building that collapsed close to the Sand Field bus stop in the Lekki area of Lagos State.Emergency responders got deployed to commence rescue operations at the scene of the incident, trying to rescue six people said  to be trapped to the  ground.

The use of defective or substandard building materials, lack of requisite technical knowledge, non-adherence to building regulations, lack of maintenance, use of non-professionals and the high level of corruption lie behind the documented cases of building collapse in Nigeria, say experts.

Developers try to save money that should be spent on foundations when building, aiming to cut cost to half the price of a building, said a professor of civil engineering Anthony Ede at Covenant University in Ota, Nigeria . Consequently, buildings get saddled with weak foundations, which end up in them collapsing under a little pressure from the environment.

The landlord tampered with the Okitipupa building mentioned earlier, wanting to reconstruct  the ground floor to flats from room and parlour, unconcerned about whether it would affect the entire building, said an eyewitness to the incident. Unfortunately, nemesis caught up with him, resulting into the collapse of the entire building, killing him in the process.

These form the major reasons for the collapse of entire buildings in many parts of the country. In addition, building materials such as reinforcing steel, cement, sand and  granite play important roles in either the collapse or stability of buildings in Nigeria. Unfortunately, say experts, 10-25% of buildings that collapse in Nigeria come as a result of the use of poor quality building materials, causing many unforeseen consequences.

Anecdotal evidence from various government agencies revealed that  between 1974 and 2019, over 221 buildings collapsed across various Nigerian cities and more than half of the collapses occurred in the economic hub of Lagos. The city bore the brunt of 167 cases between 2000 and 2021, with 79 nine  percent of them residential buildings flats,  12.8 percent commercial, and the remaining 8.8 percent institutional buildings.

The Ondo State government through  the Ministry of Physical and Urban Development  wants to strengthen the  monitoring and compliance of builders with approved specifications in building designs, according to the  Commissioner for Lands and Infrastructure, Raimi Aminu, an engineer, while fielding questions from journalists on how to halt building collapses. One of the criteria for granting building approval for a proposed building design would be the stamping by a competent engineer after which the ministry would check for conformity with specifications, he said.

The Standard Organisation of Nigeria (SON) should increase its effort to sanitize building materials in the market, said Busayo Aderounmu, an economics lecturer at Covenant University, Ota, Ogun State, on how to halt building collapses. In addition,  investors and building owners should be educated on the risk of collapsing due to the use of sub-standard materials in the building construction process, he said.