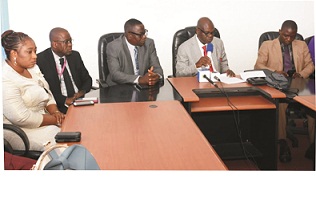 By Bukola Olamona
|
For a functional education to be guaranteed, stakeholders in the sector must deem it fit to partner with government at all levels

The Vice Chancellor of Adekunle Ajasin University, Akungba Akoko, Prof Igbekele Ajibefun made this known during a press conference ahead of the  institution’s 9th convocation.

Ajibefun who averred that government can not fund education alone, said all hands must be on deck if success is to be achieved in the sector, adding that education is capital intensive.

The VC while reacting to questions from Journalists on school fees hike, said it became imperative if quality standard was to be achieved, saying that the recent increment in the tuition of Adekunle Ajasin University had been long overdue as the old tuition had been unrealistic with the expected standard of university education.

He also disclosed that the institution will be churning out not fewer than 3,804 graduands, of which  about 20 made  First Class , emphasizing that finance was one of the major setbacks of his five years tenure at the institution which also clocked 20 years this year.

According to him:”Of the total figure for first degree, 20 candidates made First Class; 933 earned Second Class (Upper Division), 2,007 bagged Second Class (Lower Division) while 623 and 28 are in Third Class and Pass category respectively.

He said first degrees will be conferred on graduands in the Faculties of Arts, Education, Law, Science, Social and Management Sciences, Institute of Education and Institute of Part time  Programmes, saying that Pastor Segun Olugboyegun will be conferred with the Doctors of Business Administration, Honoris Causa for his contributions to the development of the society

“Through this project the school will be able to generate four megawatts of electricity and our requirement is not more than two megawatts.