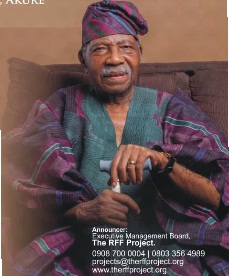 T he leader of Pan Yoruba Socio-Political Group, Afenifere, Pa Reuben Fasoranti, in this interview with BUKOLA OLAMONA reminiscence his childhood, working experience, how he met his late wife, why he did not remarry and other sundry issues in Nigeria. Excerpts:

We learnt that you just published a book that speaks about your life. What is the motive behind it?
The motive is that I don’t want to leave the world just like that without marking it, without anything to leave behind. So, I decided to write a book. I don’t want to give impression like a snake moving over a stone without any mark.

Can you share your background with us?
I was born a village boy at Uso in (Owo Local Government Area of Ondo State) in 1924. That was where my grandfather moved into. Initially, he lived in Akure and wanted to be Chief Odopetu but was denied that opportunity and he moved out. And on his way to Owo to join his relations, he stopped over (in Uso town) and that was why he decided to stay there. And there, he begot my father and my father begot me and from there my father moved to Ayede/Ogbese (in Akure North Local Government Area of Ondo State) and that is the story.

How did you start your early education?
I went to a village school at Uso for the first three years and my father said I should move to Owo where there were better schools and from there, I went to Ondo Boys’ High School, Ondo and from there to Higher College, Yaba (Lagos State) and to University College, Ibadan ( now the University of Ibadan) and from there I went abroad and I came back.

What did you study in the university?
I did English/Geography

When did you start to work?
I started work after I graduated; I started work in my alma mater, Ondo Boys’ High School as a teacher. After that, I went abroad. I came back, worked briefly at Oyemekun Grammar School and from there to Iju-Itaogbolu Grammar School as a founding Principal and I worked for 14 years. From there to Iwo Baptist School (Osun State) and from there to Olivet Baptist School, Oyo. I came to Christ’s School, Ado Ekiti as a principal. I then retired at Christ School, Ado-Ekiti.

Was it your ambition to become a teacher?
I didn’t want to become a teacher but my boss in Ondo Boys ‘High School continued to pester my life. He said he wanted to retain me and one other friend of mine, who is now late, Venerable Ibiyomade. We were very good in the school. He wanted to retain us. I ran away for about six months looking for a job in Lagos. I was told that I was too young, too small. So, my principal sent for me again and I went back to Ondo Boys’ High School to continue the teaching.

Since you were being pestered to continue to teach, did you later enjoy teaching?
Yeah, I later enjoyed it. Like I said after leaving school, I went into teaching reluctantly but later the principal of my school again got me tied down so I started to enjoy teaching and after that ,I came to Akure. I was invited to establish Iju-Ita Ogbolu Grammar School, where I worked for 14 years and from there to Iwo, then to Oyo Olivet and Christ’s School.

How sociable were you when you were young?
I was moderately sociable, I had many friends. I was a member of dancing club in the University of Ibadan. We used to dance classical dances: tango and so on, and we kept on doing that during holidays when I came back from Ibadan, but these days of course I don’t socialize.

At what point did you settle down?
I got married at the time I finished school. My fiancé finished school before me. She went abroad and I joined her two years after she left Nigeria.

How did you meet her?
Both of us were travelling to Ibadan in the same lorry at that time and she came to Ondo. She was an Ondo girl and we parted. A few days after, we met again I asked her where she was living. She was living not far away from my house and I asked her if I could come and visit her and she said okay. That was how we started and we courted for almost eight to 10 years.

Was there any resistance from both parents when you were about to marry?
No. Her father liked me because of my performance in school. I went to Ondo Boys’ High School, she was an Ondo girl. She too heard about my performance in the school. They all admired me. So, when they saw us together, they didn’t object.

What about your own parents?
My parents did not object my choice. My father didn’t interfere.

How was the home front when you were transferred from one place to the other, how were you able to cope?
We had to endure it. She went into government service because she got a scholarship to study abroad. So, she left me behind in Nigeria after two years, I went to join her there, in UK. She got a government job as an education officer and was posted to Ilesa. I was in Akure and then later she was transferred to Benin and I was at Iju-Itaogbolu, Ondo State. I used to visit her there until I persuaded her to resign her job. She came to establish Omolere Nursery and Primary School as a proprietress and founder.

While she was away, who was taking care of the children when you were not around?
She took the children with her and at a point when they were becoming troublesome, she left them behind and they stayed back with me. That was how we managed.

Some years back you lost your wife, and you didn’t remarry, people were expecting you to remarry, why didn’t you remarry?
Simply because it wouldn’t be the same again.

Are you saying there could be no other woman like her?
Yes. That is what I am saying and I was not fascinated to any woman again. We had no problem with each other. She and I were good friends, very close. I can’t see any other woman like her. I decided not to get married again. Not only that, I didn’t want any problem for my children because marrying another woman, it wouldn’t be the same like their mother.

Then how were you coping without your wife?
I was coping with my job and relations and my children . And that was my interest. I had work in many places in Iju-Itaogbolu from there to Iwo, from there, Olivet Oyo and from there Ado Ekiti where I retired. I had interest in my job. My job occupied my mind.

Was there any pressure on you that you must remarry?
Yes there was, particularly from my parents. But I told them that they got nothing to do with my life and I think the children enjoyed themselves, no pressure from outside, no nagging and that has been the same till today.

You are over 90 years, will you say you are fulfilled in life?
O yes. I am, in my family, with my job, with my public life.

Was there anything you missed when you were younger and you feel like going back to that period?
I enjoyed my youthful days. I wanted to do medicine but I didn’t do science in school. So, that was the disadvantage but in the arts course which I did English/Geography, gave me enough satisfaction.

After the death of your daughter, Mrs Olakunori, you were complaining that police were not doing well in their investigation, are you now satisfied that one of the suspects had been arrested and facing trial?
Yes they eventually helped us to nab one of them. He is in the detention, on awaiting trial. That gives me satisfaction. That she did not die in vain.

As a retired teacher, how will you compare education then and now?
No way. There is no basis for comparison at all. Standard was higher then. Teachers were more dedicated, children were ready to learn and parents also cooperated. Take it or leave it.

Late Chief Obafemi Awolowo introduced free education to the Western Region, if he had opportunity of looking back, do you think he would be happy with the situation of education now?
He wouldn’t be happy. He would want to do something better and fine-tune it.

What do you think is the way forward?
Government should get themselves together and do a critical study, using experienced teachers, retired teachers. That will get them ideas.

You were a close associate of late Chief Adekunle Ajasin. At what point did you meet him?
All along, he was a principal at Owo and I was a principal in Akure when we founded the first political party, we were meeting in my Akure compound. When it got to a point of getting a leader, he was presiding over our meetings here and we went to him to be the leader of the group.

What form of punishment specifically do you think could be meted out to treasury looters?
They should be jailed and be dispossessed of the loots.

The Afenifere has been clamouring for the restructuring of this country but it seems the body language of the government in power doesn’t go that way. What do you think is wrong?
We will keep on criticising them. We tell them what we think should be done. They, themselves, are sitting up a bit. They don’t cover their ears, saying that they are deaf to what we are saying. We keep on making releases. Our secretary, Chief Arogbofa occasionally makes some releases and points out the faults in government. They take note of them, although they pretend not to hear.

How was life after retirement?
I didn’t really retire. After retirement, I went back to teaching. I founded Omolere Nursery and Primary School and after that I founded Akure High School, which is still there till today. So, my mind is alive all the time, I keep on teaching, meeting with teachers. It has been a lovely time for me.

Some people are calling for power to shift to the south in 2023, particularly the South West, do you subscribe to that?
I will very much like it but will they allow it ? Will the northerners allow it? With what we are seeing now, northerners may not allow it and that may be the beginning of crisis because it cannot be the north all the time.

What legacy do you what to leave behind to the generations coming behind?
I hope some of them copy me. They took after me. Some of them want to celebrate me, my students at Olivet Baptist, my students at Ondo Boys’ High School, my students at Iju-Itaogbolu Grammar School. They have been coming up to rally round me after retirement. I think they might have seen something in me.