‘Why I prefer secular to gospel music’ 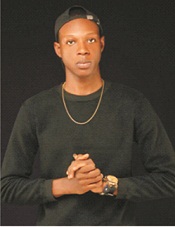 ‘Why I prefer secular to gospel music’

By Damilola Origbemisoye
|
A Nigeria upcoming rapper, Adelana Oluwatosin Michael popularly known as Thowbias has made it known why he preferred secular music to gospel music.

The 23-year-old who hails from Owo, Ondo State is a graduate of Mass Communication, Adekunle Ajasin University.

He was awarded the best rapper last year in his school and he believed the award was on merit.

His words: “The people voted me in, I believe I am worth the award”.

Thowbias, when speaking with Friday Extravaganza made it clear that he discovered his talents, rapping, at the age of 16, three years after the death of his parents.

“I started as a gospel rapper, but when I got to school. I have to be secular because that is what people wanted. Switching to secular rapping was not easy for me because many people condemned me.

“If the instrumental are good, I can rap for good 15 minutes non stop,” he boosted.

He added that his grandmother who became his guardian after the death of his parents was neutral on his music career. “she was sitting on the fence, she believes in anyhow it goes” he said.

He further noted that his university days were not easy ones as he had to merge his music career and his studies.

His advice to upcoming artist is that they should be consistent. ” consistency matters a lot in music, you never know when your light will shine. The road may seem rough now, but one day, it will be smooth,” he stated.