Why I want to be President —Tinubu 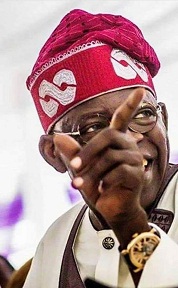 The National Leader of the All Progressive Congress (APC) Asiwaju Bola Ahmed Tinubu, yesterday said in Ekiti that he was vying for the 2023 presidency to usher in hope and real change in the country.

Tinubu explained that the country needs a competent leader, who can unite the people, tackle insecurity and rejig the debilitating economy.

Tinubu spoke in Ado Ekiti during his consultation with the members of the Ekiti State Council of Traditional Rulers in furtherance of his 2023 presidential aspiration.

The former Lagos State Governor was accompanied to the venue of the meeting held at the Traditional Council Chambers, by the Deputy Governor of Ekiti State, Bisi Egbeyemi and leaders of the Southwest Agenda 2023 for Tinubu Presidential ambition.

Addressing the Council, chaired by the Chairman of the Council and Onisan of Isan Ekiti, Oba Gabriel Adejumo, Tinubu averred that he was in Ekiti to consult with the traditional rulers that he would be contesting the 2023 presidency, so that he could get their prayers and support.

“We have struggled for democracy and today, we have democracy, but we are not stable yet. There is insecurity, hopelessness, lack of education, and suffering in the land. By now, we should have a good farming system and opportunities to produce for other nations to buy.

“We are here to answer the call of our children by educating them the right way, so that we can leave a Nigeria that is united, prosperous and abundant for them. We chose democracy and we must not fail in this task.

“I’m contesting this race to renew the hope and make the future great for our children. For Nigeria to stand united and develop, we require patience and wisdom. We have to be united, that is the only way we can be great.

“That was why we formed APC based on principles. I want to tell you that Nigeria needs serious change. I knew how Lagos was when I took over and we had never failed any election. There must be continuity in governance for progress to be attained.

The National Chairman of SWAGA, Senator Dayo Adeyeye, said Tinubu has made great investment to the development of Ekiti in terms of human resources and that the traditional rulers must appreciate him.

“That APC is in Ekiti today is traceable to God and Tinubu. He struggled for it and restored progressive politics here. He has made many Ekiti people commissioners, Special Advisers and local government chairmen in Lagos.

“Tinubu honoured our own hero in Ekiti, Adekunle Fajuyi by building a house for him. He had helped so many people, including myself. Tinubu brought a paradigm shift to Lagos governance, in fact, he is a miracle worker. As a governor of Lagos State, he was ranked first and no wonder he remained the last man standing when the then AD lost grip of the Southwest.