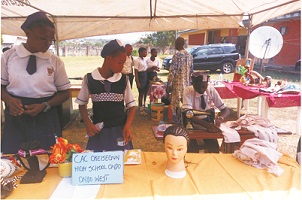 By Bukola Olamona
|
An educationist, Kunle Lawore, has called on the government to give education financing the same kind of special treatment that agriculture and industry enjoys.

In an interview with Journalists, Lawore, who runs RiseUp Schools and Colleges, in Lagos, said private school owners go through a lot to raise funds for infrastructure.

However, given the complementary role they play in providing education, he said they deserved more support from the government.

He said: “One key challenge which I believe everyone involved in education in Nigeria will relate to is infrastructure. It costs a great deal to have appropriate facilities in place to run a school in Nigeria.

You have to generate power and that costs a great deal if you use technologies like audio visuals.

“Requirements by banks are highly prohibitive. I strongly believe that government needs to have a different mindset towards education considering its potential impact on the economy of the nation.

If special banks can be set up for Agriculture and Industry, nothing stops government from doing same for the educational sector.”

Lawore urged the government to set up education banks that could offer single-digit interest loans to proprietors.

“School owners are very important stakeholders in nation building, and efforts should be concerted by way of policy to aid them in capacity building which will have multiplier effect on the economy in the long run.

This can be achieved by ensuring these banks give loans at single digits. It will also naturally drive down cost of offering educational services,” he said.

Lawore, an Archaeologist, said he was motivated to get involved in education because of his passion for youths.

He said this passion was sustained from when he started out as a tutorial centre teacher before his university education to when he owned a centre which later metarmophosed into a full-fledged school.

He said: “Sometime in early July 2004, I realised I could make significant impact by being involved with youths.

Before I gained admission to the university, I had been involved with teaching secondary school students on private basis and in tutorial centres, particularly those preparing for their Senior School Certificate Examination (SSCE).

I continued this even as an undergraduate especially when on holidays. So, I had experience dealing with youths at this level. I realised I could make significant impact by starting a tutorial centre while building my mentoring capacity.”

Regarding adoption of technology by schools, Lawore said schools needed to do more.

“For schools integrating technologies as integral part of instruction and engagements with stakeholders within the school value chain including use of software to track performance and provide critical analytics.