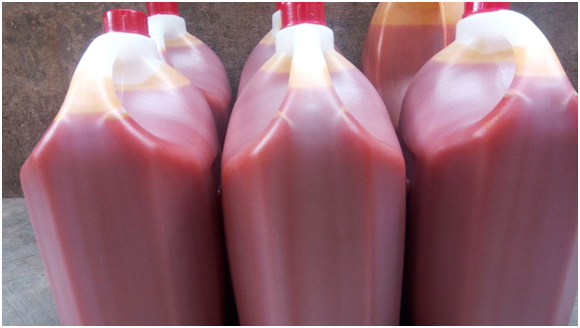 The outrageous price of palm oil in the market has become a source of concern for many Nigerians.

According to a seller, who simply identified herself as Tosin, the price of palm oil was determined by seasons.

However, palm oil farmers in Ondo state have revealed that the current high cost of palm oil in the market was due to the large amount of money expended on production.

Chairman National Palm Producers Association of Nigeria (NPPAN), Ondo State Chapter, Mr Bolarinwa Adetula said the current price of palm oil in the market was due to the magnanimousness of farmers to consider the people.

He said farmers had to bring down the price to that level so that the palm oil would be affordable by the common man, saying the farmers deserved kudos.

“We do not consider it expensive because there are inputs before you produce palm oil. A litre of diesel we were buying for N180 last year is now selling for N340 per litre.
“Farmers too will have to recover their costs. So, it is whatever we are putting in that determines the cost of palm oil,” Adetula stated.

He further said that aside diesel used to mill the oil, the cost of every other materials used have doubled in the market.

He noted that the price of palm oil would only fall if prices of materials used in its production fall in the market, appealing to the federal government to address the high inflation in the country.

A founding member of the NPPAN in Ondo state, Mr Kiladejo Ojo John lamented that most of the grants from the Federal government were given to non real farmers, adding that majority of them rarely benefited from intervention programs, loans and grants from government.

Another oil palm farmers, Mr Bamidele Blessing revealed that aside the high costs of materials needed to produce palm oil, the money spent on transporting the product and ticketing have also increased.

The farmers called on the federal government to ensure roads were well constructed, seedlings, implements and other materials needed to boost palm production were given to them.