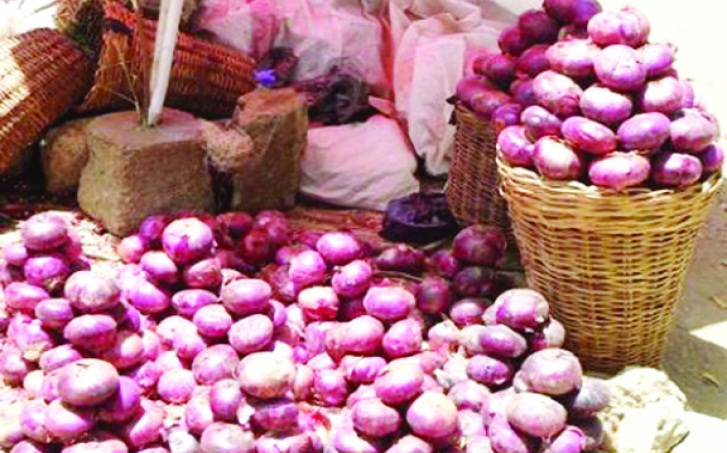 Nigerians have continued to lament the persistent increase in the price of onions, which has caused scarcity of the commodity across major markets in Ondo State and Nigeria in general.
Some onions sellers who spoke with The Hope on why the commodity is costly, adduced it to incessant rainfall that flooded farms in the Northern part of the country.
The sellers also revealed that a bag of onions that costs between N10,000 and N12,000 before is are now sold for N65,000 and N80,000 respectively.
Speaking on the geometric increase in the price of the commodity, an onion seller, Mrs Ronke Asamo said the incessant rainfall in the North was responsible for the scarcity as the rain destroyed many onion farms.
Also, Mrs Esther Margaret said a bag of onions now costs between N65,000 and N80,000.
Mrs Sade Adebisi and Bose Akinremi said the quantity of onions they were buying for N200 is now sold for N500.
The Hope gathered that people now use other alternatives such as garlic to prepare their meals.
Meanwhile, the United Nations (UN) food agency said global food commodity prices have increased sharply in November to their highest level in nearly six years, due to adverse weather condition.
The Food and Agriculture Organisation (FAO) said prices of the most globally traded foodstuffs were up across the board, putting extra pressure in particular on 45 countries that need outside help to feed their populations.
The FAO Food Price Index averaged 105 points during the month, up 3.9 percent from October and 6.5 percent from a year earlier.
The sugar price index was up 3.3 percent month-on-month amid “growing expectations of a global production shortfall” as bad weather sparked weaker crop prospects in the EU, Russia and Thailand.
Dairy prices also rose 0.9 percent to near an 18-month high, in part because of a boom in sales in Europe. Meat prices were up 0.9 percent from October, but significantly down on a year ago, the report said.
The increase in prices is an extra burden for those who saw their income fall as a result of the coronavirus pandemic, which the FAO said is proving to be “an important driver of the levels of global food insecurity.
“Forty-five countries, 34 of them in Africa, continue to be in need of external assistance for food,” it said.
What is more, it noted a risk of above-average rainfall in southern Africa and East Asia, while parts of Near East Asia and East Africa were expecting reduced rains, “conditions that may result in adverse production shocks.