Why smokers are die-hard addicts 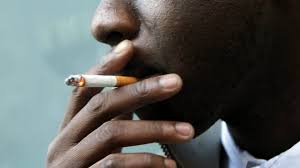 By Maria Famakinwa
|
Despite warning from World Health Organisation (WHO) that smoking is an invitation to untimely death this is not enough to scare smokers from the deadly act. Not even what it is written at the pack of cigarettes that smokers are liable to die young; has been in any way able to discourage smokers against the unhealthy act, which has become habitual to them.

Many now wondered if life is truly sacrosanct, why would a sane person continue in the act that can lead him/her to an early grave? Findings had shown that most smokers had become addicted to it that they returned to their vomit after vowed never to smoke again.

Some addicted smokers who had quitted smoking in a chat with The Hope revealed reasons why it is difficult for many smokers to quit which he said included urge for nicotine, lack of willpower, the company they keep, depression among others.

A commercial driver, Mr Kareem Lawode explained that quitting smoking could be hard because it is more than just a bad habit many term it to be, it is an addiction. “It is easy for anyone who has not involved in smoking before to think that quitting the act should not be a barrier but it goes beyond that. Smokers knew that smoking is bad for them but it also gives them satisfaction which makes them get hooked to cigarettes.

“God liberated me completely from smoking five years ago. This was after several failed attempts to quit. Every smoker knows its negative effects on one’s health but there is something that attracts them to it which makes the person unsettled when the urge to smoke is intense. It took prayers for me to be free from smoking after my health was affected.”

Sharing similar sentiment, a public servant, Mr Abbey Deremi, who described himself as a chain smoker added that if he could quit smoking, then, any smoker can. On why many smokers cannot quit easily said, “One of the reasons many find it hard to quit is nicotine. It is a chemical in cigarettes that makes one addicted to smoking over time. The more you smoke, the more nicotine you will need to feel normal. When your body did not get nicotine, you feel uncomfortable and crave for cigarettes.”

While appealing to smokers to quit, Deremi, who disclosed that he smoked for 11years before he finally quitted described it as a destructive act and said that if one failed to leave smoking, it will leave one, according to him was the word that made him quitted finally after an x -ray result conducted on him revealed how blackish his heart had turned to as a result of smoking.  He explained that the medical doctor advised him to quit smoking instead of allowing smoking to quit him when he is dead. “This word from the doctor was so touching that I meditated on it over and over again and made up my mind to start my treatment and quit smoking before it quits me according to the doctor’s advice.

“Since then, I  have never had the urge to smoke instead, the doctor’s voice often re – echoed in my mind. Even those who know me never believed I could win the battle against smoking. So, determination also plays an important role to quit smoking”.

In the submission of an engineer, Mr Badewa Adeleye, hinted that many find it hard to quit because cigarettes fill a need. They use cigarettes to cope with the stress of daily life. “They see it as a companion and may have strong feelings of loss when they try to quit it.”

Adeleye, who revealed further that quitting smoking for most smokers is more than just a matter of willpower explained that an average smoker may attempt to quit 6-11 times before they actually succeeded. “It is mostimes hard to think of the long-term benefits of quitting especially, when the short – term urges are nagging.

“Successfully quitting smoking is a physical, mental and behavioural challenge. The fact that one tried quitting in the past and did not work does not mean one cannot quit. One should avoid friends who lure one into smoking and seek assistant from healthcare providers or counsellors. Even though many said it is hard to quit smoking, thousands of people are quitting the act yearly, so with determination, one can quit not only smoking but any act that is injurious to one’s health. “