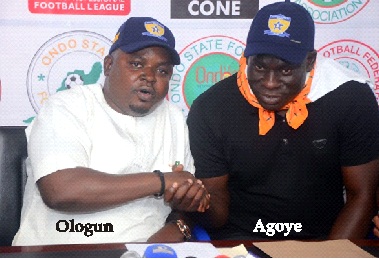 Ondo State Commissioner for Youth and Sports Development, Mr Bamidele Ologun has revealed that the new Sunshine Stars Coach, Edith Olumide Agoye was appointed because of his track record.

He added that the current management of the team are convinced that he would be able to bring his wealth of experience to bear on the team.

Ologun made the disclosure during the unveiling of the Agoye as the new gaffer of the team along with other three caoches.

He said: “All that is required for the success of the club under my watch would be made readily available.”

According to Ologun, “Myself, the new General Manager of Sunshine Stars Football Club and Sunshine Queens Football Club, Prince Babatunde Ogunja and the leadership of the team settled for Agoye among the shortlisted coaches because of his track records and the conviction that he would be able to bring his wealth of experience to bear on the club.

“Therefore, I want to reiterate that the unity of purpose of all stakeholders is required so as to rally round Agoye and his coaching crew in actualizing the common dream for Sunshine Stars Football Club.”

He said : “Agoye is one of us, and as an indigene, it is a call to duty. The Coaching job of Sunshine Stars FC comes with a huge responsibility and as managers, we have our set goals and objectives, which without mincing words, is to be among the top three in the next football season.

“I commend the state Governor, Arakunrin Oluwarotimi Odunayo Akeredolu SAN for constituting a 4-man Management committee on ODSFA, headed by His Deputy, Mr Lucky Orimisan Aiyedatiwa, in repositioning the Agency and the clubs. The committee has indeed set the pace to be leveraged upon but not without some innovations.”