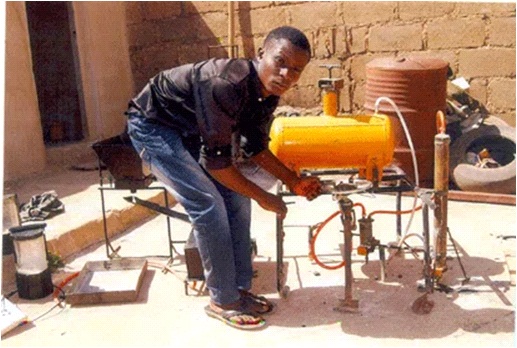 Nigeria stands out among nations with a population of over 200 million people and a literacy rate of 62 percent in 2018, according to statista.com, it boasts of people who are brilliant and have contributed to human development in many spheres of life.

Though classified as a third world country, making her fall under the umbrella of developing countries, she has no doubt produced a lot of brainy people who have made inventions for the betterment of human society.

Looking at Nigeria from a distance, it appears that the country is not capable of funding for itself, after all the country has on several occasions been described as a consumer nation, consuming more than it produces.

In one of our previous editorials stated that, “In general, Nigerians spend $52 billion (N21.6 trillion) annually on importation while the total budget for year 2022 for the nation is N17.126 trillion, indicating that the total amount of money expended on importation of goods is more than the current budget of the country.”

On a closer look, one will realise that Nigeria has had notable technological inventions in the past and more seems to be coming up.

According to a national tabloid in January last year, a car made by Auwal Hassan was showcased in Abuja by the Minister of Science and Technology, Dr Ogbonnaya Onu.

Thirty-year old Hassan from Bauchi State had used locally sourced metal scraps to make the small car which could hardly accommodate a driver and a passenger. According to the manufacturer who painted the vehicle in green white green Nigeria’s flag colour, it could move several kilometres with just few litres of fuel.

According to the media report, Onu assured Hassan of the Federal Government’s support to improve on his invention. Unfortunately, Hassan reportedly did not get any form of help to advance his invention.

There was another story of a 49-year-old Kehinde Durojaiye, based in Lagos, who made a ragged but compact jet car as the answer to Lagos’ traffic woes. He said the jet car, nicknamed ‘Kenny Jet’ could run on land, sea and in the air. Durojaiye also claimed that his ‘aero-amphibious jet car’ had travelled as far as Ibadan (84 miles away from Lagos), adding that it could move 120 kilometres per hour on land and at least six knots on the sea.

This invention also could not go beyond the embryo stage, due to lack of government support and any form of sponsorship from private investors.

Awka Anambra State-based Emeka Nelson equally invented a generator that could run purely on water. However, the young inventor could not take his device beyond powering his own apartment to a commercial level, due to limitation of resources.

There are other cases of Duro-Aina Adebola, Akindele Abiola, Faleke Oluwatoyin, and Bello Eniola, four teenage secondary school girls who in 2012 invented a urine powered generator. According to an online platform, Zikoko, their invention was showcased at Maker Faire Africa.

In 2016, 13-year old Michael Ukoma created a battery-operated fan that, when fully charged, could last up to 19 hours. He called them “The Blue Wind Fans” and they came in different sizes. The materials he used, mostly aluminium, wires, and old cartons, made his fans affordable for low-income households. He hoped to have his own company one day where he could create engines and aircraft. Fifteen year old Gerald Odo also created hydraulic toys with scrap materials. Using painted plywood, syringes, water, wire, small tubes along with a motorcycle battery to power the whole thing, he made a dump truck, excavator, and a helicopter.

UK-trained Nigerian engineer, Timothy Addigi Terfa, built a ”100 percent Nigerian” tractor in 2016. He named it ‘Ijodo’, meaning ‘labour’ in his native Tiv language. According to Terfa, the tractor was built with materials sourced locally and the invention had the ability to cover a wide variety of farm jobs due to different attachments.

Other notable technological inventions from Nigeria include the first solid fuel rocket, made and launched in 2008 by 26 year old Shehu Saleh Balami in Kaduna; emergency blood transfusion system by Dr Otu Oviemo Ovadje; and the world’s fastest computer, capable of performing 3.1 billion calculations per second, launched by Dr Philip Emeagwali.

The question that begs for an answer is, why do all these inventions usually end up not being developed to make them improve the lot of Nigerians and put Nigeria where she belongs in the comity of nations?

Dr Chris Ofonyelu from the Department of Economics, Adekunle Ajasin University, Akungba-Akoko, attributed the menace to leadership problem which manifests in form of lack of support and economic empowerment for innovators.

He said further, “When you are doing something and everybody is expecting you to fail, you are already failing in that kind of environment. Everybody is looking down on you. Nobody believes in you and nobody is giving you any kind of support, all these put together will affect the individual adversely.”

The economist expressed hope that the narrative will change soon, citing as an example a state governor who recently adopted a locally manufactured vehicle as the official brand of his government.

He expressed his optimism that a time would come when Nigerians would have no other option than to look inwards and develop our local content.

In the opinion of Professor Oluwatosin Fashina from the Department of Agricultural Extension and Communication Technology, Federal University of Technology Akure (FUTA) cited the fact that we don’t believe in ourselves as the major factor. He opined that Nigerians always think that what originates from the western world is better.

His words: “We don’t have people who fund inventors. Many have the ideas but no one to fund them. In most cases, I can say selfishness of Africans is another crucial factor. We don’t know how to encourage people selflessly. We are always concerned about what it will bring out for us.”

Fashina added: “Many don’t have people and places that can publisize their inventions. But thank God we now have the social media”

As a way out, the agricultural expert recommended that government should fund research and development and establish a school or institute for inventors where they can display and discuss their inventions or ideas.