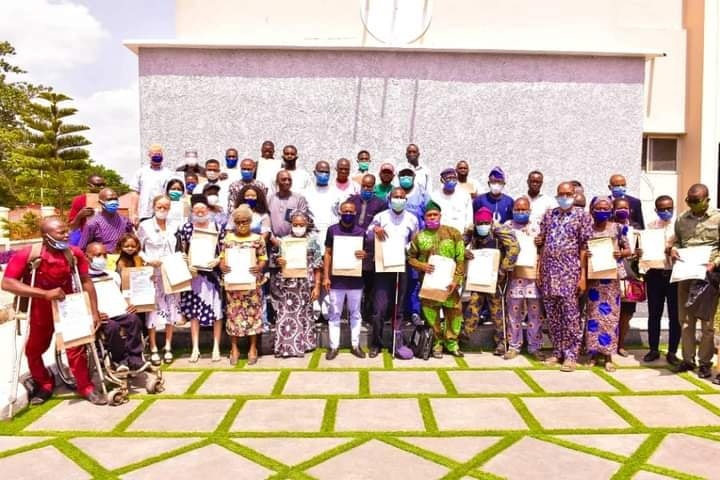 Ondo State government has explained the rationale behind the automatic employment given to 35 persons with disabilities in the state.
Presenting appointment letters to the 35 newly recruited persons with disabilities into the state Civil Service, the Ondo state Governor, Oluwarotimi Akeredolu, noted that the development was a confirmation of his administration of the rights of persons with disabilities so that they would not be subjected to discrimination particularly with respect to employment opportunities in the state.
The beneficiaries ranged from the visually impaired, physically impaired, hearing and speaking impaired, albino and the care givers.
Governor Akeredolu said approval has also been granted by the state government for the recruitment of personnel into various sectors of the state public service, in spite of the dwindling financial fortune of both the state and federal government.
The governor who was represented by the Secretary to the State Government, Temitayo Oluwatuyi, explained that 2,610 workers have been recruited across different sectors of the state since his assumption of office in 2017.
He added that approval has also been given for the recruitment of 1,000 teachers in SUBEB to reduce the acute shortage of teachers in primary schools, noting that successful applicants would be issued with their letters of appointment as soon as schools resume.
“It will also interest you to know that I have also given approval for the recruitment of 432 health workers to fill the personnel gaps in the Primary Health Care facilities across the 18 Local Government Areas of the state.
“This is also ongoing and would be completed in no distant time. By the time these recruitment exercises are over, the total number of workers so far recruited by this administration since our assumption of office would have been 4,042.
“This is aside the indirect job created through our numerous projects and programmes across this state. We are indeed proud of this feat”, the governor emphasised.
Governor Akeredolu revealed that all of these are in fulfilment of electoral promises to prioritize workers’ welfare and retool the public service by driving efficiency, capacity building and injecting new blood into the system.
He added that public service has played , and continues to play a very important role in the development of the state, since inception of his administration, matters affecting public service are treated with high premium.
In his remarks, the state Head of Service, Oluwadare Aragbaiye, who congratulated the beneficiaries also urged them to reciprocate the kind gesture by cooperating with government to achieve its goals and aspirations.
He equally advised them to respect their employers and be dedicated to duties while also imbibe the spirit of team work in the performance of their primary assignment.
In separate remarks, the Grand Patron of Persons living with disabilities in the state, Dr Tunji Abayomi and the Chairman, Agency for the Welfare of Persons with Disabilities in the state , Sanmi Elegbeleye, commended the state governor, describing him as a Messiah sent to liberate the disabled across the state.
Other who spoke includings Mrs Busayo Ademeso, Mr Kazeem Aminu and Sefini Adekola noted that Governor Akeredolu’s gesture has broken the jinx of unemployment facing them for the past 20 years.