‘Why we take to washing of windscreens’ 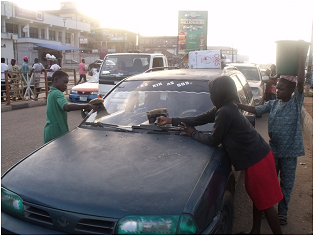 By Josephine Oguntoyinbo
|
Eleven years old Abdullahi James hails from Kano State, he is the first born of his mother. His father has numerous wives. Though he claimed to be schooling in a public primary school at Oba-Ile, Akure, he is seen at the Old Garage along the popular Oba Adesida road in Akure during school hours doing his business of washing windscreens of vehicles.

According to him, his father is based in Kano State while his mother resides in Akure. He said his mother makes a living by selling ‘Tuwo’.

The Hope reporter got to the popular Adesida road on Monday morning at about 8:30am where Abdullahi and his other colleagues were busy cleaning vehicles’ windscreens in the busy traffic to get money.

Asked why he was idling away in that area when his mates were in school, the boy who said he is presently in primary six, informed that he normally goes to school every day, but later resumes for the job in the afternoon.

He explained that his junior sister, Mariam is at home down with typhoid fever and his mother needs to buy drugs worth N5,000 for her.

“My mother persuaded me to resume work early so as to get some money for the drugs. My mother has only N1,000 and my sister is seriously sick. I need to help her, because my father is far away in Kano.

“We came to Akure in 2016,but I started this job eight months ago to help my mother. I normally make between N1,000 and N1,500 daily. Whenever  my mother is financially buoyant, I will quit the job, because it is dangerous to continue to stay in the traffic under the rain and the sun”, he said.

Also, another boy, Alausa Mustapha, who hails from Akure also claimed to be schooling in a public primary school, but does not go everyday. The 13-year- old boy who disclosed that he has repeated primary six twice noted that he started the job some months ago on his own.

“I use part of the money I get to take care of myself and the remaining goes to my parent. My father sells wrist watches at Old Garage while my mother is jobless. I am the second child of a family of five .

“At times, we clean windscreens and motorists will not give us anything. This set of people usually promise to come back, but they won’t. But some of them are very nice to us, they at times give more that expected. I am hoping to get some money for my mother to start petty trading”, he explained.

Narrating his own story, Bashiru Usman, who said he came from Ningi in Bauchi state where his parents presently reside hinted that he decided to join a truck to Akure to make both ends meet without his father’s knowledge.

“I am 20 years old from a polygamous home. I dropped out of school in primary four. My father always accused me of being jobless and threatened to send me packing from his house one day. I only informed my mother about my journey, even though she did not approve it. I was determined to leave and in January this year, I joined a travelling truck without even knowing where they were heading to.

“I slept in different shops for over a week before I saw people doing this job, I discussed with them and I joined them. I do not know anybody here, but I have rented a room apartment around Sabo area from what I get here. As soon as I make enough money, I will go home to see my parents.”

When our reporter sought the view of the Permanent Secretary, Ondo State Ministry of Women Affairs and Social Development, Mr Alaba Adeyemi on this ugly development, he posited that children  of that age ought to be in school and  under parental care .

“A lot of things do happen causing under 18 years old to be on the streets. Some are orphans, some are abandoned, some left home on their own, in addition to other reasons, they just end up being on the streets .The fact is that freedom of movement is enshrined in the constitution, but it must be well managed. They are there rendering a service, hoping that if they clean your windscreen, if you feel good enough, you will give them something to sustain themselves, instead of engaging in negative things.

“But then, I will not subscribe to it that it is good to be on the streets considering their age,they must be under their parents or both and be engaged in a vocation if they cannot afford to send them to school. As they are ,they may be prone to vices, for the fact that they are on the streets .They can easily be influenced by people with shady characters. That portends serious danger to the society”, he opined.

While saying that the Ministry do move round periodically to mop the streets. He informed that any under aged children they see will be taken  to the Correctional Home under the Ministry along Ondo road in Akure .

“We have a remand home for people like that, including those who have been reported at home for trouble making or have engaged in a crime .We cannot take them to the prison because they are under aged, but from the court, they will give the custody of that person to the ministry.

There should be permanent measures by all of us, not the government alone. Religious bodies, Non Governmental Organisations and philanthropists must collaborate to curb the menace. Most of these things are caused by the breakdown of family values and structures, if a family is intact, if the structure is strong, you will rarely see anybody of that age on the streets.

“If parents are engaged economically, if the family is okay, how can an under age children be on the streets, no parent will willingly release minors to do that,they might have been pushed to the wall. Meanwhile, the family dictates whether the society will be better. Having children begging on the streets, doing prostitution, running away from home, and engaging in unwarranted labour shows, that something is wrong in their family, it means something is not right. If the family is empowered enough, they will be able to manage their children”, he emphasised.

To this end, the PS charged parents to only have the children they can take care of, saying “if you are not ready to take care of a child ,do not bother to bring such child to the world, because parenting goes beyond just giving birth to a child .It is a whole lot of work. Parents must try as much as possible to live up to their responsibilities. These include children’s well-being in terms of education, health, mental and spiritual growth.