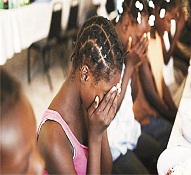 Like a bitter pill, a 47-year-old man, Salawu Abdul, is yet to come to terms  with the fact that his wife of 19 years was leaving him because he is HIV positive.

The petitioner, Mrs. Hannah Abdul , had approached the Grade A Customary Court in Akure for the dissolution of her union with her husband on the grounds of battering and his  HIV status.

Her words,  “The report for settlement as suggested by the court during the last hearing proved abortive, because I can no longer live with an HIV patient nor can I stand his constant battering whenever he snuff  his Indian hemp.

The marriage was blessed with three children Agnes Abdul, 17,  Angela Abdul,  14 and Destiny 8.

In his defence, the respondent, Salawu Abdul, 47, did not deny the fact that he is HIV positive. But he  denied taking  Indian hemp.

Prior to the court’s judgement, the respondent, Salawu Abdul ,47, informed the court that Hannah had taken their second child to Lokoja without his consent.

But the petitioner,  kept interrupting, bowing her heads at intervals and on  top of her voice, said,  ” it’s a lie, sir , he’s lying!”

She told the court that the new allegation was a flimsy excuse because he  (the respondent) was aware when she took the child, Angela to Lokoja to continue her education, saying he had gone twice to see her.

She, however, pleaded that the court should compel her husband to bring back her 8-year-old son whom she claimed he had taken to Zaria to live with his sister .

The president of the court, Mr. Akinleye Akinseye in his judgement held, “since there was no legal customary union between the parties,  they are free to end the union.”

He consequently,   awarded the custody of the two children- Agnes Abdul 14 and Destiny Abdul 8 to the petitioner by virtue of  the provision of section 22(1) of the Customary Court Laws Cap 41 of Ondo State relating to the guardianship or custody of children.

He also stated that both parties shall henceforth be responsible for the educational and  medical  needs  including the   welfare  of the children. The respondent was also  mandated to pay N10, 000 monthly allowance from  August 1, 2019  at the court’s registry.