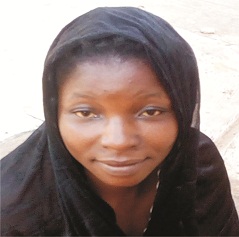 By Fatima Muraina
|
It was  a moment of joy for Mrs Esther Joseph, whose husband lost his  manhood to ritualists   recently, but  was  later restored through  divine intervention.

Over joyous Esther, who smiled  and laughed  repeatedly  as she narrated  the ordeal to The Hope  Metro,  expressed happiness and gave  thanks to God that her  husband’s  manhood has been restored.

She  said the ugly  incident which had put  fears in her  mind, has been solved  as her  husband  can now  perform his marital  obligation.

She  pointed  at  her  little son’s  penis  and said, “that day, after  the ritualists  touched him, his penis suddenly  became  very small like that of this  small boy.

“I was  afraid when I saw  his  private part shrunk like  my son’s.  I fondled it repeatedly,  but it  did not rise, unlike  how it used  to be during  foreplay.

“Mummy, haa, I thank God  and I appreciate Him,  because I was in a fix  as to how to go about  the situation .

“I  wondered  how  I would  have  coped with his  predicament  and what might happen to him.

“Since  his manhood  has  been restored,  he has been very active again, such that we made love  throughout  the night.

“In fact neither of us  has gone out since morning. I am still checking on it repeatedly to make sure that it is functioning,” she said.

The  man, Mr John Joseph, who spoke in retrospection of the incident said everything he had on him during the incident like money also disappeared.

He added that when he reported the matter to the Oba-Ile police station, the officers on duty,  physically confirmed his predicament  when he removed his trouser. But was asked to bring money for them to conduct investigation which he said he could not provide.

He said  a neighbour took him to the church where he finally recovered his  manhood.