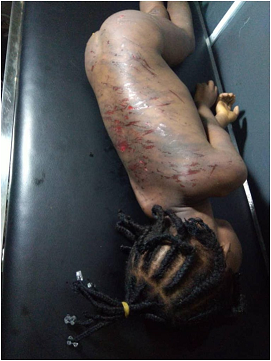 A middle age woman, whose identity was yet to be ascertained has allegedly tortured her 4-year -old daughter to death.

The Hope Metro gathered that the woman had rushed the girl to the  Ondo State Teaching Hospital, Akure Annex on Wednesday night, after she was tortured to a state a coma.

It was learnt that the woman escaped with the girl’s corpse immediately she discovered  she had died.

Another account said it was the father of the kid that beat the girl to a state of coma before she gave up the ghost and the woman merely rushed her  to the hospital.

But as at the time of filing this report, details of the heinous act still remained sketchy.

Meanwhile, the Ondo State Police Command has said that it has launched a manhunt on  the suspect.

Confirming the unfortunate incident, the  State Police spokesperson, Mr Femi Joseph,  said men of homicide detective have been drafted to the State Specialist Hospital in Akure for investigation.

He explained that the police received an information from a concerned citizen that a woman whose identity was  yet to  be ascertained  brought her child in a critical condition and that the child reportedly gave up the ghost before any medical assistant could be given to her.

According to Joseph  the woman rushed her child to the hospital and immediately  the child later died, she  took the dead child away to an unknown destination.

His words: “We received information about a woman that rushed her daughter to the hospital almost dead. Report said the child later gave up the ghost before she could be attended to by the Doctor and medical personnel on  night duty.

“Our problem in conducting investigation into the matter is that there is no medical report or address or identity of the woman and her deceased daughters record at the hospital when our men went to make inquiring on the incident .

“We received a report that the mother of the child,  realising that her baby had  died took  the corpse and headed to an unknown destination and as I speak to you, we have not arrested the woman.

He,  said that calls and text messages put  across to the Chief Medical Director of the hospital were neither picked  nor responded  to the text message, “Joseph stated.