Women’s place no longer in kitchen 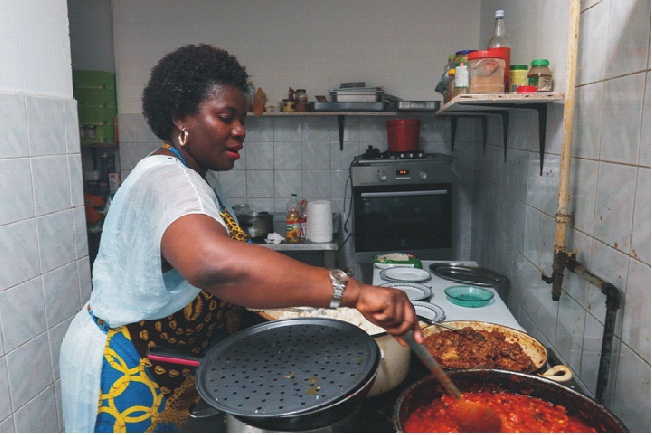 Gone are the days when a woman’s role was believed to be restricted to the kitchen. Those were days when a woman, beginning from her days as a little girl, was made to see herself merely as an appendage to the man who would later be her husband. That was a time “when a well trained”woman might not see beyond her place as a house wife and a mother of babies.
Here are now the days of what a man can do a woman can also do better “.
In recent times, many women have excelled in various spheres of life, from politics to education, sports to entertainment and in many other areas. Such women include Margaret Thatcher, Funmilayo Ransome -Kuti, Mary Slessor, Dora Akinyili, Ellen Johnson Sirleaf and most recently Dr. Mrs. Ngozi Okonjo Iweala.
These are women who have shown that hidden in every woman is a God-given ability to excel and carry out great exploits beyond the kitchen.
Specifically, our searchlight is on Dr Mrs Ngozi Okonjo-Iweala from the soil of Ogwashi-Uku in Delta State, where her father is a professor and the king. She rose to become a don in economics. The Western trained economist has served as Nigeria’s finance minister twice.
To add another feather to her cap, the economics expert was recently nominated for the position of Director General (DG) of World Trade Organization (WTO).
She rose to the final stage of the selection process where she contested withYoo Myung Hee from South Korea. The final stage of the selection process favoured her but there was an obstruction from the US government. For that reason, Dr. Mrs. Okonjo lweala has not been able to seal her fate as head of the World Trade Organization. However, let us take a look at the life of a woman who has shown that a woman can get to any height in life if given the appropriate education that she needs.
On the issue, The Hope spoke with chairperson, National Association of Women Journalist, Ondo State (NAWOJ) Doris Olumoko. She stated that, it is not easy for only the husband to take care of the family. Even in a situation where by the husband is working as a civil servant and the wife is also working, it is still very difficult.
She added that, “we all know how heavy school fee is becoming these days. Bills are pouring in everyday, cost of living is increasing on a daily basis while we do not seem to have salary increment. So in that regard there is a dire need for women to start thinking outside the box. Let’s think of what else we can do. Federal government encouraged everybody to have a farm beside the house. That itself has indicated that we are on our own to feed our family in terms of food. Now, apart from having small farms, let us cultivate and produce food crops that can feed the family”.
She encouraged all women to make judicious use of businesses on the internet. “There are so many events taking place on social media. Apart from sharing our story, we could also be media entrepreneurs. We have different types of businesses we can do that cannot in anyway affect our primary assignments, be it civil servant, journalist or Nurse. Whatever career you find yourself in, there are different things you can do, aside the time of work, other things you can do that will bring extra income to the family. ln whatever field you are, stay empowered.
Doris Olumoko also urged our women to be industrious and make themselves busy with something that can add value to the family.
She stated further that, “Education is very key. When I talk about education, it covers both getting yourself first degree, second and third degrees. Education advances. There are other things you can educate yourself with. You can educate yourself in terms of poultry rearing, you can learn how to rear birds, get a small poultry at the back of your house, you can rear like twenty birds because you cannot just consume twenty birds for Christmas. You can also sell part of it. With that, you have empowered your family. Apart from issues of poultry, there are other things you can learn. Learn different skills that can also empower you, like puff puff, chin-chin or cake making and you can also learn how to tie Gele on the internet. With that, you have empowered yourself. Educate yourself with skills. Acquire skills and use them to build yourself.”
Funmilayo Kayode said women should not depend on their husbands before the children can eat. “Have your own source of income, then when your husband arrives home, you can request for the money you used in cooking for the children. Try and do things without demanding money from the husband all the time.”
She added that, government should promote the peaceful resolution of disputes by including the perspectives of women and girls. Strengthen women’s ability to earn money and support their households by providing skills training for women. Sensitize the public on the disadvantages of early and forced child marriage, highlight the value of girls’ education and of women’s participation in economic development.
She stated further that, women must be encouraged to participate in the political process and educate the public on the need to empower themselves so that they can be useful to their children and to the family